Different mechanisms are responsible for dishabituation of electrophysiological auditory responses to a change in acoustic identity than to a change in stimulus location. 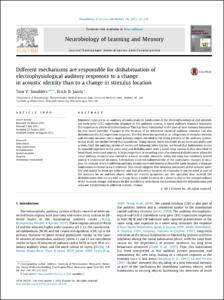 View / Download
1.9 Mb
Date
Authors
Smulders, Tom V
Jarvis, Erich D
Repository Usage Stats
252
views
165
downloads
Abstract
Repeated exposure to an auditory stimulus leads to habituation of the electrophysiological and immediate-early-gene (IEG) expression response in the auditory system. A novel auditory stimulus reinstates this response in a form of dishabituation. This has been interpreted as the start of new memory formation for this novel stimulus. Changes in the location of an otherwise identical auditory stimulus can also dishabituate the IEG expression response. This has been interpreted as an integration of stimulus identity and stimulus location into a single auditory object, encoded in the firing patterns of the auditory system. In this study, we further tested this hypothesis. Using chronic multi-electrode arrays to record multi-unit activity from the auditory system of awake and behaving zebra finches, we found that habituation occurs to repeated exposure to the same song and dishabituation with a novel song, similar to that described in head-fixed, restrained animals. A large proportion of recording sites also showed dishabituation when the same auditory stimulus was moved to a novel location. However, when the song was randomly moved among 8 interleaved locations, habituation occurred independently of the continuous changes in location. In contrast, when 8 different auditory stimuli were interleaved all from the same location, a separate habituation occurred to each stimulus. This result suggests that neuronal memories of the acoustic identity and spatial location are different, and that allocentric location of a stimulus is not encoded as part of the memory for an auditory object, while its acoustic properties are. We speculate that, instead, the dishabituation that occurs with a change from a stable location of a sound is due to the unexpectedness of the location change, and might be due to different underlying mechanisms than the dishabituation and separate habituations to different acoustic stimuli.
Type
Journal article
Subject
Attentional modulation
Dishabituation
Song habituation
Spatial location
Surprise
Zebra finch
Acoustic Stimulation
Animals
Auditory Perception
Female
Finches
Habituation, Psychophysiologic
Memory
Sound Localization
Vocalization, Animal
Permalink
https://hdl.handle.net/10161/11201
Published Version (Please cite this version)
10.1016/j.nlm.2013.08.010
Publication Info
Smulders, Tom V; & Jarvis, Erich D (2013). Different mechanisms are responsible for dishabituation of electrophysiological auditory responses to a change in acoustic identity than to a change in stimulus location. Neurobiol Learn Mem, 106. pp. 163-176. 10.1016/j.nlm.2013.08.010. Retrieved from https://hdl.handle.net/10161/11201.
This is constructed from limited available data and may be imprecise. To cite this article, please review & use the official citation provided by the journal.
Collections
More Info
Show full item record