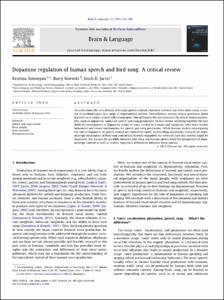 View / Download
896.7 Kb
Date
Authors
Simonyan, Kristina
Horwitz, Barry
Jarvis, Erich D
Repository Usage Stats
201
views
365
downloads
Abstract
To understand the neural basis of human speech control, extensive research has been done using a variety of methodologies in a range of experimental models. Nevertheless, several critical questions about learned vocal motor control still remain open. One of them is the mechanism(s) by which neurotransmitters, such as dopamine, modulate speech and song production. In this review, we bring together the two fields of investigations of dopamine action on voice control in humans and songbirds, who share similar behavioral and neural mechanisms for speech and song production. While human studies investigating the role of dopamine in speech control are limited to reports in neurological patients, research on dopaminergic modulation of bird song control has recently expanded our views on how this system might be organized. We discuss the parallels between bird song and human speech from the perspective of dopaminergic control as well as outline important differences between these species.
Type
Journal article
Subject
Animals
Brain Mapping
Dopamine
Humans
Learning
Singing
Songbirds
Speech
Permalink
https://hdl.handle.net/10161/11208
Published Version (Please cite this version)
10.1016/j.bandl.2011.12.009
Publication Info
Simonyan, Kristina; Horwitz, Barry; & Jarvis, Erich D (2012). Dopamine regulation of human speech and bird song: a critical review. Brain Lang, 122(3). pp. 142-150. 10.1016/j.bandl.2011.12.009. Retrieved from https://hdl.handle.net/10161/11208.
This is constructed from limited available data and may be imprecise. To cite this article, please review & use the official citation provided by the journal.
Collections
More Info
Show full item record