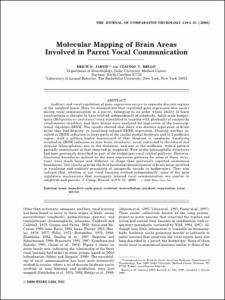 View / Download
2.2 Mb
Date
Authors
Jarvis, ED
Mello, CV
Repository Usage Stats
109
views
161
downloads
Abstract
Auditory and vocal regulation of gene expression occurs in separate discrete regions of the songbird brain. Here we demonstrate that regulated gene expression also occurs during vocal communication in a parrot, belonging to an order whose ability to learn vocalizations is thought to have evolved independently of songbirds. Adult male budgerigars (Melopsittacus undulatus) were stimulated to vocalize with playbacks of conspecific vocalizations (warbles), and their brains were analyzed for expression of the transcriptional regulator ZENK. The results showed that there was distinct separation of brain areas that had hearing- or vocalizing-induced ZENK expression. Hearing warbles resulted in ZENK induction in large parts of the caudal medial forebrain and in 1 midbrain region, with a pattern highly reminiscent of that observed in songbirds. Vocalizing resulted in ZENK induction in nine brain structures, seven restricted to the lateral and anterior telencephalon, one in the thalamus, and one in the midbrain, with a pattern partially reminiscent of that observed in songbirds. Five of the telencephalic structures had been previously described as part of the budgerigar vocal control pathway. However, functional boundaries defined by the gene expression patterns for some of these structures were much larger and different in shape than previously reported anatomical boundaries. Our results provide the first functional demonstration of brain areas involved in vocalizing and auditory processing of conspecific sounds in budgerigars. They also indicate that, whether or not vocal learning evolved independently, some of the gene regulatory mechanisms that accompany learned vocal communication are similar in songbirds and parrots.
Type
Journal article
Subject
Animals
Auditory Pathways
Brain
Brain Mapping
Cell Count
DNA-Binding Proteins
Gene Expression Regulation
Hearing
Male
Parakeets
RNA, Messenger
Transcription Factors
Vocalization, Animal
Permalink
https://hdl.handle.net/10161/11218
Collections
More Info
Show full item record