Influence of network topology and data collection on network inference. 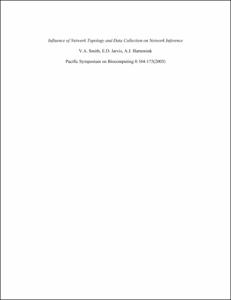 Adjunct Professor in the Dept. of Neurobiology
Dr. Jarvis' laboratory studies the neurobiology of vocal communication. Emphasis is placed on the molecular pathways involved in the perception and production of learned vocalizations. They use an integrative approach that combines behavioral, anatomical, electrophysiological and molecular biological techniques. The main animal model used is songbirds, one of the few vertebrate groups that evolved the ability to learn vocalizations. The generality of the discoveries is tested in other vocal
Alphabetical list of authors with Scholars@Duke profiles.