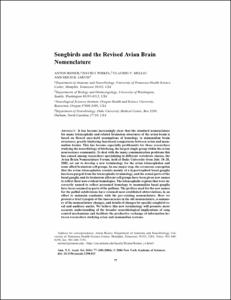 View / Download
6.1 Mb
Date
Authors
Reiner, Anton
Perkel, David J
Mello, Claudio V
Jarvis, Erich D
Repository Usage Stats
135
views
178
downloads
Abstract
It has become increasingly clear that the standard nomenclature for many telencephalic and related brainstem structures of the avian brain is based on flawed once-held assumptions of homology to mammalian brain structures, greatly hindering functional comparisons between avian and mammalian brains. This has become especially problematic for those researchers studying the neurobiology of birdsong, the largest single group within the avian neuroscience community. To deal with the many communication problems this has caused among researchers specializing in different vertebrate classes, the Avian Brain Nomenclature Forum, held at Duke University from July 18-20, 2002, set out to develop a new terminology for the avian telencephalon and some allied brainstem cell groups. In one major step, the erroneous conception that the avian telencephalon consists mainly of a hypertrophied basal ganglia has been purged from the telencephalic terminology, and the actual parts of the basal ganglia and its brainstem afferent cell groups have been given new names to reflect their now-evident homologies. The telencephalic regions that were incorrectly named to reflect presumed homology to mammalian basal ganglia have been renamed as parts of the pallium. The prefixes used for the new names for the pallial subdivisions have retained most established abbreviations, in an effort to maintain continuity with the pre-existing nomenclature. Here we present a brief synopsis of the inaccuracies in the old nomenclature, a summary of the nomenclature changes, and details of changes for specific songbird vocal and auditory nuclei. We believe this new terminology will promote more accurate understanding of the broader neurobiological implications of song control mechanisms and facilitate the productive exchange of information between researchers studying avian and mammalian systems.
Type
Journal article
Subject
Animals
Auditory Pathways
Brain
Neural Pathways
Songbirds
Telencephalon
Terminology as Topic
Vocalization, Animal
Permalink
https://hdl.handle.net/10161/11231
Published Version (Please cite this version)
10.1196/annals.1298.013
Publication Info
Reiner, Anton; Perkel, David J; Mello, Claudio V; & Jarvis, Erich D (2004). Songbirds and the revised avian brain nomenclature. Ann N Y Acad Sci, 1016. pp. 77-108. 10.1196/annals.1298.013. Retrieved from https://hdl.handle.net/10161/11231.
This is constructed from limited available data and may be imprecise. To cite this article, please review & use the official citation provided by the journal.
Collections
More Info
Show full item record