VOCALIZATIONS AND ASSOCIATED BEHAVIORS OF THE SOMBRE HUMMINGBIRD (APHANTOCHROA CIRRHOCHLORIS) AND THE RUFOUS-BREASTED HERMIT (GLAUCIS HIRSUTUS). 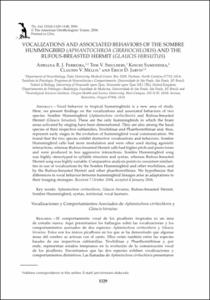 View / Download
13.3 Mb
Date
Authors
Ferreira, Adriana RJ
Smulders, Tom V
Sameshima, Koichi
Mello, Claudio V
Jarvis, Erich D
Repository Usage Stats
152
views
134
downloads
Abstract
Vocal behavior in tropical hummingbirds is a new area of study. Here, we present findings on the vocalizations and associated behaviors of two species: Sombre Hummingbird (Aphantochroa cirrhochloris) and Rufous-breasted Hermit (Glaucis hirsutus). These are the only hummingbirds in which the brain areas activated by singing have been demonstrated. They are also among the basal species of their respective subfamilies, Trochilinae and Phaethornithinae and, thus, represent early stages in the evolution of hummingbird vocal communication. We found that the two species exhibit distinctive vocalizations and behaviors. Sombre Hummingbird calls had more modulation and were often used during agonistic interactions, whereas Rufous-breasted Hermit calls had higher pitch and purer tones and were produced in less aggressive interactions. Sombre Hummingbird song was highly stereotyped in syllable structure and syntax, whereas Rufous-breasted Hermit song was highly variable. Comparative analysis points to consistent similarities in use of vocalizations by the Sombre Hummingbird and other trochilines, and by the Rufous-breasted Hermit and other phaethornithines. We hypothesize that differences in vocal behavior between hummingbird lineages arise as adaptations to their foraging strategies.
Type
Journal article
Permalink
https://hdl.handle.net/10161/11267
Collections
More Info
Show full item record