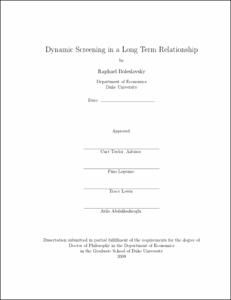 I characterize optimal long term contracts offered by a monopolist to a buyer whose private valuation evolves according to a branching process with privately known transition probability. The optimal contract can be implemented in a simple way, and presents the buyer with a tradeoff between a high initial fixed fee and low future prices. In an interaction with a long time horizon, the relationship will terminate prematurely with probability close to one. Optimal mechanisms are quite different from models in which the transition probability is known, and the buyer's private information is his initial valuation. Optimal contracts resemble the structure of term life insurance contracts, and have features similar to actual interactions between retailers and suppliers.