Behavior, Ecology, and Conservation of Sea Turtles in the North Atlantic Ocean 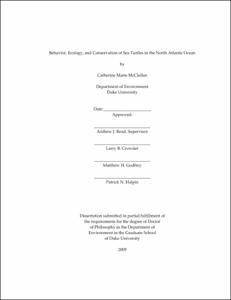 Sea turtles have experienced dramatic population declines during the last century as a consequence of direct harvest, by-catch in fisheries, and habitat loss. Despite almost 50 years of partial international protection, several populations of sea turtles are still at imminent risk of extinction. Our knowledge of their complex life histories is still far from complete; these knowledge gaps hinder our ability to provide scientific advice regarding their conservation and management. It is the very complexity of their life histories, which allows them to exploit widely separated habitats during development, often over the course of decades, which makes them inherently difficult to study. I used satellite telemetry (n=60) to investigate the movements and habitat use patterns of juvenile loggerhead (<italic>Caretta caretta</italic>), green (<italic>Chelonia mydas</italic>), and Kemp's ridley (<italic>Lepidochelys kempii</italic>) sea turtles on their summer feeding grounds in North Carolina estuaries. These turtles migrate into and out of the estuarine waters each spring and autumn, encountering a gauntlet of fishing gear on each journey. The by-catch of sea turtles is an important conservation issue in North Carolina, and throughout the world's oceans. I evaluated conservation measures established to reduce the by-catch of sea turtles in Pamlico Sound's autumnal large-mesh gill net fishery for southern flounder (<italic>Paralichthys lethostigma</italic>), using a spatially explicit predator/prey model. My findings indicated that species-specific habitat preferences contributed to a turtles' risk of encountering fishing gear and that areas of high by-catch are predictable from patterns of overlap between sea turtle habitat use and flounder fishing effort. I then examined how the behavior of green turtles affected their vulnerability to incidental capture in estuarine commercial fisheries. Individual green turtles interact with multiple gears per season as a result of strong site fidelity to habitats also preferred by fishers. Telemetry also allowed me to examine individual variation in movements, habitat use, and site fidelity patterns of juvenile loggerhead turtles, both within the estuary and as the turtles migrated out into the North Atlantic. I used these observations to test the hypothesis of a discrete ontogenetic shift in habitat and diet in juvenile loggerheads. Approximately one-third of large juvenile loggerheads tagged in North Carolina estuaries return to oceanic habitat, sometimes for several years, where they are vulnerable to by-catch in pelagic fisheries. This led me to conclude that the long held notion of a discrete ontogenetic habitat shift between the oceanic and neritic habitat was incorrect for juvenile loggerheads (and possibly also for green turtles). Finally, I explored variation in migratory destinations in these animals through multivariate analyses of carbon and nitrogen stable isotope ratios in blood plasma and red blood cells, and through analysis of sex, genetic, haplotype, body size, and remigration records, and described the trophic niche of these turtles with Bayesian isotope mixing models. Variation in migratory destination (oceanic or neritic habitat) was best described by stable isotope ratios of nitrogen and remigration tendency. Turtles that returned to the open ocean had significantly lower nitrogen ratios than those animals that remained in the neritic zone and their diets retained a substantial contribution of epipelagic prey items. The diet composition of neritic turtles, on the other hand, consisted primarily of estuarine benthic invertebrates during the summertime and autumn foraging season but shifted toward pelagic jellyfish, fish, and <italic>Sargassum</italic> during the overwintering period. Oceanic turtles likely came from open ocean regions prior to entering the summer foraging grounds while neritic turtles likely overwintered at the edge of the Gulf Stream. The agreement between the dietary compositions and migration patterns between the two groups of turtles suggest that these feeding and habitat use strategies were persistent characteristics in the turtles I sampled. My work has improved our understanding of sea turtle habitats in North Carolina estuaries and identified their migratory destinations and overwintering habitats. I hope that this work lays the groundwork for future studies that will explore how variation in habitat use and feeding strategies are manifested in life history traits that affect fitness directly, such as survivorship, growth rates, stage durations, and fecundity.