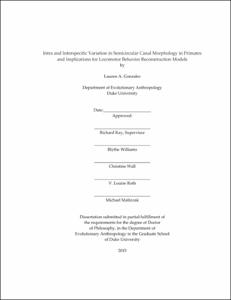 The semicircular canals of the vestibular system detect angular head rotations and play a fundamental role in guiding motor reflexes during locomotor behaviors. While extensive research has documented the relationship between the semicircular canal shape (i.e. radius of curvature and canal length) and locomotor behaviors, levels of intraspecific variation in primates are relatively unknown. Predictive models using these metrics to reconstruct locomotion in extinct animals are generally based on one individual per species. Furthermore, the influence of body size and to a lesser degree brain size heavily influences overall canal morphology.

This study documents intraspecific variation in the size, shape and orientation of the semicircular canals in relation to changes in function, brain size, and body size via analysis of high resolution CT scans of large samples of extant primate species. I test the hypothesis that the extent of intraspecific variation differs across a sample of primates, reflecting the intensity of selective pressure on canal shape in species that require agility during locomotion. I also examine whether spatial constraints resulting from the size of the skull (reflected by the size of the brain) affect canal radii of curvature and canal orthogonality more strongly than observed agility during locomotion.

To this end, data was gathered from high-resolution CT images of museum specimens. For the comparative analysis, 14-matched pairs of adult extant primate species were selected that contrast in agility and brain size in closely related genera. CT images of these specimens were used to measure functional measures of canal sensitivity (e.g., canal radii of curvature, orthogonality). This data was used to test hypotheses concerning intraspecific and interspecific variation in semicircular canal functional morphology. This data was then combined with a larger mammalian dataset culled from the literature, to further test hypotheses relating to body-size and brain size dependent variation in individual canal metrics.

Evaluation of levels of intraspecific variation support the hypothesis put forth by Billet et al. (2012), that selection on canal morphology is relaxed in animals with slow locomotor behaviors, who are observed to have higher levels of intraspecific variation. Analyses of interspecific variation provides tentative support for the use of canal orthogonality in reconstructive models, most especially in canal angles that seem least effected by other constraints—brain size, etc. However, locomotor signals are complex and brain/skull interactions can potentially produce misleading results when reconstructing locomotor behaviors. This work highlights the importance of critically assessing comparative groups used for inferring behaviors in both extinct and extant animals.