Wanderers in Contradiction. The Italian Road to Modernism (1903-1922) 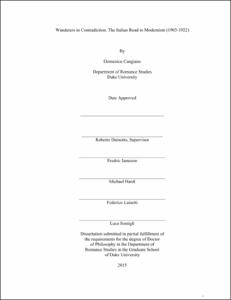 My dissertation, Wanderers in Contradiction. The Italian Road to Modernism (1903-1922), analyzes how a generation of intellectuals approach the cultural revolution brought by Modernism. In Chapter One, dedicated to Pirandello’s essay On Humor, modernist themes, such as the perception of life as an unstoppable and unrepresentable flux, are examined in the Italian work that best represents them in the context of nineteenth-century ‘negative thought.’ Chapter Two, which is devoted to the writings of Giovanni Papini and Giuseppe Prezzolini, and Chapter Three, in which I focus on the work of Ardengo Soffici and Aldo Palazzeschi, analyze the ‘positive’ response to Modernism. These intellectuals highlighted how the cultural crisis was an opportunity to reject dangerous forms of essentialism, and opened the way for a new form of art committed to the representation of contingency. Conversely, Chapter Four, which deals with Giovanni Boine and Piero Jahier, and Chapter Five, on Scipio Slataper and Carlo Michelstaedter, illustrate the ‘negative’ reaction to the modernist crisis of values. These authors, who abandoned a purely epistemological perspective in favor of a religious or ethical one, manifest an anti-modernist thread within Modernism itself. Therefore, my research contributes to three different general areas of scholarship: literature, philosophy, and history. Broadly speaking, it advances the understanding of Italian culture and the way Italian intellectuals participate in and are influenced by European interactions. It also engages with philosophical debates concerning the crisis of metaphysical Foundations, including the role of Italian writers in this process.