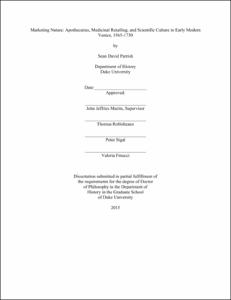 This dissertation examines the contributions of apothecary craftsmen and their medicinal retailing practices to emerging cultures of scientific investigation and experimental practice in the Italian port city of Venice between 1565 and 1730. During this important period in Europe’s history, efforts to ground traditional philosophical investigations of nature in a new material culture of empirical and experimental practice elicited significant debate in scholarly communities. Leading the way in advancing the authority of “experience” were Europe’s medical practitioners divided between university-trained physicians and guild-regulated apothecaries and surgeons. In Italy, humanist praise for the practical arts and new techniques of analyzing inherited texts influenced sixteenth-century university physicians to redefine the medical discipline in terms of its practical aims to intervene in nature and achieve useful effects. This led to an important revival in northern Italian universities at Ferrara and Padua of the classical Greek writings on the empirical disciplines of anatomy and pharmacy. In the sixteenth century the university at Padua, under the patronage of the Republic of Venice, was the site of Europe’s first public botanical garden, anatomical theater and clinical demonstrations. The university also hosted important experimental practitioners such as Andreas Vesalius, Galileo Galilei and William Harvey, and remained a leading center of medical investigation attracting an international faculty of students and professors until the eighteenth century. At the same time, the study of Aristotelian natural philosophy in original Greek texts was largely emancipated from the faculty of theology at Padua, nurturing innovative discourses on experimental method by figures such as Giacomo Zabarella and the anatomist Fabricius Aquapendente.

The unique intellectual climate at Padua has thus attracted significant scholarly attention in the history and philosophy of early modern science. However, the university’s important relationships with the thriving world of artisan guilds and their commercial practices in the nearby city of Venice have not received due attention in historical scholarship. To address this issue, this dissertation focuses upon a unique group of guild-trained medical practitioners in Venice – apothecaries – to trace the circulations of materials, skills, and expertise between Padua and the Venetian marketplace. Drawing on the methods of urban history, medical anthropology, literary studies and intellectual history, I conceptualize Venice as an important “contact zone,” or space of dialogue between scholarly and artisanal modes of investigating and representing nature between the latter sixteenth and early eighteenth centuries. In particular, I focus upon emerging apothecary strategies for retailing nature to public audiences through their medicinal creations, printed books, licensing petitions, and their pharmacy shops. Through these practices, apothecaries not only marketed commercial remedies during a period of growing interest in pharmaceutical matters, but also fashioned their own expertise as learned medical practitioners linking both theory and practice; head and hand; natural philosophy and practiced skill. In 1565 Venice’s apothecaries made their first effort to define their trade as a liberal profession in establishing a College of Apothecaries that lasted until 1804. Already by the turn of the eighteenth century, however, Venice’s apothecaries had adopted the moniker as “Public Professors” and engaged in dialogue with leading professors at Padua for plans to institute a new school of “experimental medical chemistry” with the prior of the apothecary college proposed as its first public demonstrator. Looking to a wide variety of statements on the urban pharmacy in Venice in published medical books, pharmacopeias, trade manuals, literary works, civic rituals and archival licensing and regulatory decrees, I trace the evolution of the public apothecary trade in Venice, paying particular attention to the pharmacy’s early modern materialization as a site of cultural and intellectual exchanges between the artisan workshop and the university world inhabited by scholars.

My readings of these sources lead to three important conclusions regarding the significance of apothecary retailing to the scientific culture of early modern Italy. First, the urban terrain of artisan practice in a merchant republic must be placed alongside the traditionally studied princely courts and universities as a fertile ground for dialogue between artisans and scholars in the study of nature. Second, apothecary investments in processing and retailing nature during this period made significant contributions to the material culture of early modern science in both mediating a growing pharmacopeia of exotic materials imported from around the globe, and in fashioning workshop models for the first university chemical laboratories instituted at Padua in the eighteenth century. And third, apothecary marketing strategies expressing their own medical expertise over nature’s materials articulated a fusion of textual learning and manual skill that offered some of the earliest profiles of the experimental practitioner that was eventually adopted in the public discourse of the experimental New Sciences by the latter seventeenth century.