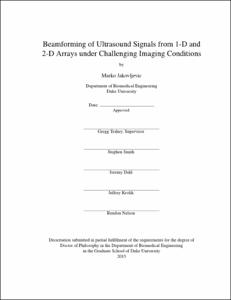 Beamforming of ultrasound signals in the presence of clutter, or partial aperture blockage by an acoustic obstacle can lead to reduced visibility of the structures of interest and diminished diagnostic value of the resulting image. We propose new beamforming methods to recover the quality of ultrasound images under such challenging conditions. Of special interest are the signals from large apertures, which are more susceptible to partial blockage, and from commercial matrix arrays that suffer from low sensitivity due to inherent design/hardware limitations. A coherence-based beamforming method designed for suppressing the in vivo clutter, namely Short-lag Spatial Coherence (SLSC) Imaging, is first implemented on a 1-D array to enhance visualization of liver vasculature in 17 human subjects. The SLSC images show statistically significant improvements in vessel contrast and contrast-to-noise ratio over the matched B-mode images. The concept of SLSC imaging is then extended to matrix arrays, and the first in vivo demonstration of volumetric SLSC imaging on a clinical ultrasound system is presented. The effective suppression of clutter via volumetric SLSC imaging indicates it could potentially compensate for the low sensitivity associated with most commercial matrix arrays. The rest of the dissertation assesses image degradation due to elements blocked by ribs in a transthoracic scan. A method to detect the blocked elements is demonstrated using simulated, ex vivo, and in vivo data from the fully-sampled 2-D apertures. The results show that turning off the blocked elements both reduces the near-field clutter and improves visibility of anechoic/hypoechoic targets. Most importantly, the ex vivo data from large synthetic apertures indicates that the adaptive weighing of the non-blocked elements can recover the loss of focus quality due to periodic rib structure, allowing large apertures to realize their full resolution potential in transthoracic ultrasound.