Judaism and Catholicism in Italy during the Belle Époque: A Comparative Approach 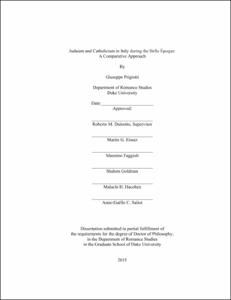 This dissertation compares the responses of Italian Jewish and Catholic intellectuals to the process of secularization and modernization triggered by Italian national unification (1861-1870). Arguing that, in the case of Italy, the borders separating Jewish and Catholic communities have been more porous than generally thought, my research intends to destabilize simplistic historiographical oppositions based on a dichotomous anti-/philo-Semitic approach. In comparing Judaism and Catholicism vis à vis the new, modern, and secular nation-state, I offer a more complex picture of the relation between these two religions. In order to avoid presenting a one-sided account, my comparative approach brings together studies and perspectives from different fields. The first three chapters analyze a wide variety of sources, ranging from official speeches to journal articles, archival documents, and literature. I analyze the Commemoration of the Capture of Rome (1870) given by Roman mayor Ernesto Nathan in 1910 and Salvatore De Benedetti’s 1884 Opening Address at the University of Pisa on The Hebrew Bible as a source for Italian literature, as well as articles published in the Jewish journals Il Vessillo Israelitico and Il Corriere Israelitico, the Catholic journal La Civiltà Cattolica, and the anticlerical journal L’Asino. The last chapter focuses on the Jewish historical novel The Moncalvos, written by Enrico Castelnuovo in 1908, investigating the problematic appeal of secularism and Catholicism for a Jewish family settled in Rome. By drawing on this variety of sources, my dissertation both scrutinizes the interrelated role of Jewish, Catholic, and secular culture in Italian national identity and calls for a reconsideration of the starting point of modern Jewish-Catholic dialogue, well before the events following the Shoah, the rise of the State of Israel, and the Second Vatican Council declaration Nostra Aetate.