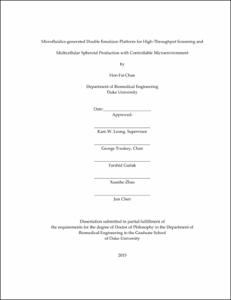 High-throughput processing technologies hold critical position in biomedical research. These include screening of cellular response based on phenotypic difference and production of homogeneous chemicals and biologicals for therapeutic applications. The rapid development of microfluidics technology has provided an efficient, controllable, economical and automatable processing platform for various applications. In particular, emulsion droplet gains a lot of attention due to its uniformity and ease of isolation, but the application of water-in-oil (W/O) single emulsion is hampered by the presence of the oil phase which is incompatible with aqueous phase manipulation and the difficulty in modifying the droplet environment.

This thesis presents the development of a double emulsion (DE) droplet platform in microfluidics and two applications: (1) high-throughput screening of synthetic gene and (2) production of multicellular spheroids with adjustable microenvironment for controlling stem cell differentiation and liver tissue engineering. Monodisperse DE droplets with controllable size and selective permeability across the oil shell were generated via two microfluidics devices after optimization of device design and flow rates.

In addition, DE droplets promoted rapid aggregation of mammalian cells into single spheroid in 150 min. Size-tunable human mesenchymal stem cells (hMSC) spheroids could be extracted from the droplets and exhibited better differentiation potential than cells cultured in monolayer. The droplet environment could be altered by loading matrix molecules in it to create spheroid-encapsulated microgel. As an example, hMSC spheroid was encapsulated in alginate or alginate-RGD microgel and enhanced osteogenic differentiation was found in the latter case.

Lastly, the capability of forming spheroids in DE droplet was applied in liver tissue engineering, where single or co-culture hepatocyte spheroids were efficiently produced and encapsulated in microgel. The use of alginate-collagen microgel significantly improved the long-term function of the spheroid, in a manner similar to forming co-culture spheroids of hepatocytes and endothelial progenitor cells at a 5 to 1 ratio. The hepatocyte spheroid encapsulated in microgel could be useful for developing bioartificial liver or drug testing platform or applied directly for hepatocyte transplantation.