A Three-Molecule Model of Structural Plasticity: the Role of the Rho family GTPases in Local Biochemical Computation in Dendrites 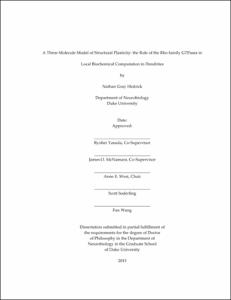 It has long been appreciated that the process of learning might invoke a physical change in the brain, establishing a lasting trace of experience. Recent evidence has revealed that this change manifests, at least in part, by the formation of new connections between neurons, as well as the modification of preexisting ones. This so-called structural plasticity of neural circuits – their ability to physically change in response to experience – has remained fixed as a primary point of focus in the field of neuroscience.

A large portion of this effort has been directed towards the study of dendritic spines, small protrusions emanating from neuronal dendrites that constitute the majority of recipient sites of excitatory neuronal connections. The unique, mushroom-like morphology of these tiny structures has earned them considerable attention, with even the earliest observers suggesting that their unique shape affords important functional advantages that would not be possible if synapses were to directly contact dendrites. Importantly, dendritic spines can be formed, eliminated, or structurally modified in response to both neural activity as well as learning, suggesting that their organization reflects the experience of the neural network. As such, elucidating how these structures undergo such rearrangements is of critical importance to understanding both learning and memory.

As dendritic spines are principally composed of the cytoskeletal protein actin, their formation, elimination, and modification requires biochemical signaling networks that can remodel the actin cytoskeleton. As a result, significant effort has been placed into identifying and characterizing such signaling networks and how they are controlled during synaptic activity and learning. Such efforts have highlighted Rho family GTPases – binary signaling proteins central in controlling the dynamics of the actin cytoskeleton – as attractive targets for understanding how the structural modification of spines might be controlled by synaptic activity. While much has been revealed regarding the importance of the Rho GTPases for these processes, the specific spatial and temporal features of their signals that impart such structural changes remains unclear.

The central hypotheses of the following research dissertation are as follows: first, that synaptic activity rapidly initiates Rho GTPase signaling within single dendritic spines, serving as the core mechanism of dendritic spine structural plasticity. Next, that each of the Rho GTPases subsequently expresses a spatially distinct pattern of activation, with some signals remaining highly localized, and some becoming diffuse across a region of the nearby dendrite. The diffusive signals modify the plasticity induction threshold of nearby dendritic spines, and the spatially restricted signals serve to keep the expression of plasticity specific to those spines that receive synaptic input. This combination of differentially spatially regulated signals thus equips the neuronal dendrite with the ability to perform local biochemical computations, potentially establishing an organizational preference for the arrangement of dendritic spines along a dendrite. Finally, the consequences of the differential signal patterns also help to explain several seemingly disparate properties of one of the primary upstream activators of these proteins: brain-derived neurotrophic factor (BDNF).

The first section of this dissertation describes the characterization of the activity patterns of one of the Rho family GTPases, Rac1. Using a novel Förster Resonance Energy Transfer (FRET)- based biosensor in combination with two-photon fluorescence lifetime imaging (2pFLIM) and single-spine stimulation by two-photon glutamate uncaging, the activation profile and kinetics of Rac1 during synaptic stimulation were characterized. These experiments revealed that Rac1 conveys signals to both activated spines as well as nearby, unstimulated spines that are in close proximity to the target spine. Despite the diffusion of this structural signal, however, the structural modification associated with synaptic stimulation remained restricted to the stimulated spine. Thus, Rac1 activation is not sufficient to enlarge spines, but nonetheless likely confers some heretofore-unknown function to nearby synapses.

The next set of experiments set out to detail the upstream molecular mechanisms controlling Rac1 activation. First, it was found that Rac1 activation during sLTP depends on calcium through NMDA receptors and subsequent activation of CaMKII, suggesting that Rac1 activation in this context agrees with substantial evidence linking NMDAR-CaMKII signaling to LTP in the hippocampus. Next, in light of recent evidence linking structural plasticity to another potential upstream signaling complex, BDNF-TrkB, we explored the possibility that BDNF-TrkB signaling functioned in structural plasticity via Rac1 activation. To this end, we first explored the release kinetics of BDNF and the activation kinetics of TrkB using novel biosensors in conjunction with 2p glutamate uncaging. It was found that release of BDNF from single dendritic spines during sLTP induction activates TrkB on that same spine in an autocrine manner, and that this autocrine system was necessary for both sLTP and Rac1 activation. It was also found that BDNF-TrkB signaling controls the activity of another Rho GTPase, Cdc42, suggesting that this autocrine loop conveys both synapse-specific signals (through Cdc42) and heterosynaptic signals (through Rac1).

The next set of experiments detail one the potential consequences of heterosynaptic Rac1 signaling. The spread of Rac1 activity out of the stimulated spine was found to be necessary for lowering the plasticity threshold at nearby spines, a process known as synaptic crosstalk. This was also true for the Rho family GTPase, RhoA, which shows a similar diffusive activity pattern. Conversely, the activity of Cdc42, a Rho GTPase protein whose activity is highly restricted to stimulated spines, was required only for input-specific plasticity induction. Thus, the spreading of a subset of Rho GTPase signaling into nearby spines modifies the plasticity induction threshold of these spines, increasing the likelihood that synaptic activity at these sites will induce structural plasticity. Importantly, these data suggest that the autocrine BDNF-TrkB loop described above simultaneously exerts control over both homo- and heterosynaptic structural plasticity.

The final set of experiments reveals that the spreading of GTPase activity from stimulated spines helps to overcome the high activation thresholds of these proteins to facilitate nearby plasticity. Both Rac1 and RhoA, the activity of which spread into nearby spines, showed high activation thresholds, making weak stimuli incapable of activating them. Thus, signal spreading from a strongly stimulated spine can lower the plasticity threshold at nearby spines in part by supplementing the activation of high-threshold Rho GTPases at these sites. In contrast, the highly compartmentalized Rho GTPase Cdc42 showed a very low activation threshold, and thus did not require signal spreading to achieve high levels of activity to even a weak stimulus. As a result, synaptic crosstalk elicits cooperativity of nearby synaptic events by first priming a local region of the dendrite with several (but not all) of the factors required for structural plasticity, which then allows even weak inputs to achieve plasticity by means of localized Cdc42 activation.

Taken together, these data reveal a molecular pattern whereby BDNF-dependent structural plasticity can simultaneously maintain input-specificity while also relaying heterosynaptic signals along a local stretch of dendrite via coordination of differential spatial signaling profiles of the Rho GTPase proteins. The combination of this division of spatial signaling patterns and different activation thresholds reveals a unique heterosynaptic coincidence detection mechanism that allows for cooperative expression of structural plasticity when spines are close together, which in turn provides a putative mechanism for how neurons arrange structural modifications during learning.