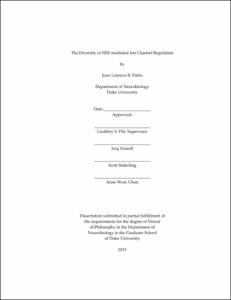 Fibroblast growth factor homologous factors (FHFs) are noncanonical members of the fibroblast growth factor family (FGFs, FGF11-FGF14) that bind directly to voltage gated sodium channels (VGSCs), thereby regulating channel activity and consequently neuronal excitability. Mutations in FGF14 cause spinocerebellar ataxia while FGF13 is a candidate for X-linked mental retardation. Since FGF13 and FGF14 are nearly identical within their respective VGSC-interacting domains, those distinct pathological consequences have generally been attributed to regional differences in expression. I have shown that FGF13 and FGF14 have non-overlapping subcellular distributions and biological roles even in hippocampal neurons where both are prominent. While both FHFs are abundant in the axon initial segment (AIS), only FGF13 is observed within the soma and dendrites. shRNA knockdown and rescue strategies showed that FGF14 regulates axonal VGSCs, while FGF13 only affects VGSCs in the somatodendritic compartment. Thus, FGF13 and FGF14 have nonredundant roles in hippocampal neurons, with FGF14 acting as an AIS-dominant positive regulator and FGF13 serving as a somatodendritic negative regulator. Both of these FHFs also perform important non-VGSC regulatory roles. FGF14 is a novel potassium channel regulator, which binds to KCNQ2 and regulates both localization and function. FGF14 is also capable of serving as a “bridge” between VGSCs and KCNQ2 thus implicating it as a broad organizer of the AIS. FGF13, on the other hand is involved in a new form of neuronal plasticity called axon initial segment structural plasticity. Knockdown of FGF13 impairs AIS structural plasticity and reduces L-type CaV current through channels known to be important to this new form of plasticity. Both of these novel non-VGSC roles are specific to the FHF in question because FGF13 does not regulate KCNQ2 whereas FGF14 knockdown does not affect AIS position. These data imply wider roles for FHFs in neuronal regulation that may contribute to differing roles in neural disease.