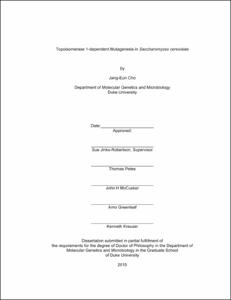 Topoisomerase 1 (Top1) resolves transcription-associated supercoils by generating transient single-strand breaks in DNA and is a major source of transcription-associated mutagenesis in Saccharomyces cerevisiae. Top1 generates a distinctive mutation signature characterized by deletions in short, tandem repeats, and a similar signature is associated with ribonucleoside monophosphates (rNMPs) in DNA. DNA polymerases incorporate rNMPs into genomic DNA, and such rNMPs are efficiently removed in an error-free manner by ribonuclease (RNase) H2. In the absence of RNase H2, persistent rNMPs give rise to short deletions via a mutagenic process initiated by a Top1 incision at an rNMP. There is only partial overlap, however, between Top1-dependent deletion hotspots identified in highly transcribed DNA and those associated with rNMPs, suggesting the existence of both rNMP-dependent and rNMP-independent events. Here I present evidence that rNMP-independent hotspots reflect processing of a trapped Top1 cleavage complex (Top1cc), and that rNMP-dependent hotspots reflect sequential Top1 reactions. A sequential-cleavage model for rNMP-dependent deletions is tested in vivo and in vitro, employing Top1 cleavage and ligation assays. In addition, I report that rNMP-dependent hotspot activity is significantly enhanced when Top1 incises the non-transcribed strand of an actively transcribing reporter gene. Finally, I describe a novel type of mutagenesis that reflects repair of multiple Top1ccs. Specifically, expression of a mutant Top1 with reduced ligation activity (Top1-T722A) caused large deletion mutations that are distinct from Top1-dependent short deletions. Genetic data indicates that Top1-T722A-dependent large deletions are non-homologous end joining events.