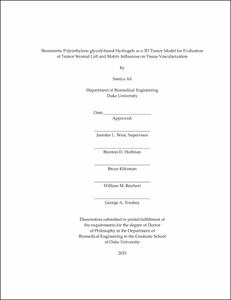 To this day, cancer remains the leading cause of mortality worldwide1. A major contributor to cancer progression and metastasis is tumor angiogenesis. The formation of blood vessels around a tumor is facilitated by the complex interplay between cells in the tumor stroma and the surrounding microenvironment. Understanding this interplay and its dynamic interactions is crucial to identify promising targets for cancer therapy. Current methods in cancer research involve the use of two-dimensional (2D) monolayer cell culture. However, cell-cell and cell-ECM interactions that are important in vascularization and the three-dimensional (3D) tumor microenvironment cannot accurately be recapitulated in 2D. To obtain more biologically relevant information, it is essential to mimic the tumor microenvironment in a 3D culture system. To this end, we demonstrate the utility of poly(ethylene glycol) diacrylate (PEGDA) hydrogels modified for cell-mediated degradability and cell-adhesion to explore, in 3D, the effect of various tumor microenvironmental features such as cell-cell and cell-ECM interactions, and dimensionality on tumor vascularization and cancer cell phenotype.

In aim 1, PEG hydrogels were utilized to evaluate the effect of cells in the tumor stroma, specifically cancer associated fibroblasts (CAFs), on endothelial cells (ECs) and tumor vascularization. CAFs comprise a majority of the cells in the tumor stroma and secrete factors that may influence other cells in the vicinity such as ECs to promote the organization and formation of blood vessels. To investigate this theory, CAFs were isolated from tumors and co-cultured with HUVECs in PEG hydrogels. CAFs co-cultured with ECs organized into vessel-like structures as early as 7 days and were different in vessel morphology and density from co-cultures with normal lung fibroblasts. In contrast to normal lung fibroblasts (LF), CAFs and ECs organized into vessel-like networks that were structurally similar to vessels found in tumors. This work provides insight on the complex crosstalk between cells in the tumor stroma and their effect on tumor angiogenesis. Controlling this complex crosstalk can provide means for developing new therapies to treat cancer.

In aim 2, degradable PEG hydrogels were utilized to explore how extracellular matrix derived peptides modulate vessel formation and angiogenesis. Specifically, integrin-binding motifs derived from laminin such as IKVAV, a peptide derived from the α-chain of laminin and YIGSR, a peptide found in a cysteine-rich site of the laminin β chain, were examined along with RGDS. These peptides were conjugated to heterobifunctional PEG chains and covalently incorporated in hydrogels. The EC tubule formation in vitro and angiogenesis in vivo in response to the laminin-derived motifs were evaluated.