Toward Better Representations of Sound with Cochlear Implants 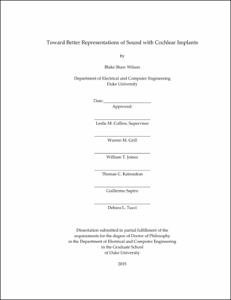 This dissertation is about the first substantial restoration of human sense using a medical intervention. In particular, the development of the modern cochlear implant (CI) is described, with a focus on sound processors for CIs. As of October 2015, more than 460 thousand persons had each received a single CI on one side or bilateral CIs for both sides. More than 75 percent of users of the present-day devices use the telephone routinely, including conversations with previously unknown persons and with varying and unpredictable topics. That ability is a long trip indeed from severe or worse losses in hearing. The sound processors, in conjunction with multiple sites of highly-controlled electrical stimulation in the cochlea, made the trip possible.

Many methods and techniques were used in the described research, including but not limited to those of signal processing, electrical engineering, neuroscience, speech science, and hearing science. In addition, the results were the products of collaborative efforts, beginning in the late 1970s. For example, our teams at the Duke University Medical Center and the Research Triangle Institute worked closely with investigators at 27 other universities worldwide.

The most important outcome from the research was unprecedented levels of speech reception for users of CIs, which moved a previously experimental treatment into the mainstream of clinical practice.