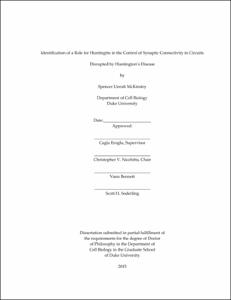 Huntington’s disease (HD) is an adult-onset, neurodegenerative disease caused by an autosomal dominant mutation in the huntingtin (HTT) gene. HD patients suffer from motor, cognitive, and psychiatric symptoms. The pathogenic mutation of HD is expansion of a CAG repeat in the first exon of the HTT that encodes for a polyglutamine (poly-Q) repeat in the huntingtin protein (Htt). HD results in neurodegeneration of the striatum and cortex, which is thought to underlie the development of HD symptoms, but recent evidence has shown that there are alterations to the connectivity of patients’ brains preceding degeneration. This study focuses on how wild type Htt contributes to establishing and maintaining synaptic connectivity and how a loss of normal Htt function may contribute to the synaptic alterations in HD.

In this study, I examined the role of wild type Htt in synapse formation and maturation synapses in the basal ganglia circuit, and I examined how loss of wild type Htt function may affect the pathogenesis of HD. To do so, I created conditional deletions of Htt in the mouse brain by crossing a floxed allele of Huntingtin to transgenic Cre lines. I conditionally deleted Htt from the cortex and the indirect pathway spiny neurons (iSPNs) of the striatum using Emx1-Cre and Adora2A-Cre, respectively. I also used a knock-in mouse model of HD, the zQ175 mouse, to examine alterations caused by the HD mutation. I used imaging and electrophysiological techniques to determine how loss of Huntingtin affected synapse number, function, and morphology in the cortex, striatum, and basal ganglia.

In order to explore the molecular mechanisms behind Htt’s control of excitatory synapse formation, I investigated its interaction with α2δ-1. α2δ-1 is a genetic modifier of mutant Htt toxicity that our lab had previously identified as the neuronal receptor of the synaptogenic Thrombospondin family (TSP) of proteins. I used in vitro neuronal cultures and biochemical analysis to determine how Htt interacts with α2δ-1 and how Htt affects TSP/α2δ-1 excitatory synapse formation. I characterized α2δ-1’s biochemical interaction with Htt and discovered that Htt postsynaptically suppresses excitatory synapses.

Taken together, these results suggest that wild type Htt functions to moderate excitatory activity in the brain. It slows the formation of excitatory connections and stabilized inhibitory ones, which may protect the brain from excitotoxic damage. These results show that Htt plays an important role in maintaining neuronal health and the establishment of synaptic connectivity in cortical and striatal circuits.