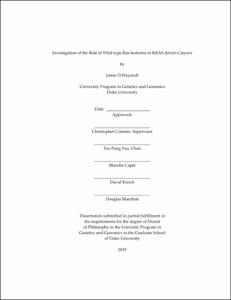 The RAS family is a group of small GTPases that can become constitutively activated by point mutations that are found in about 30% of all cancer patients. There are three well-characterized RAS family members: HRAS, NRAS, and KRAS, the latter of which is alternatively spliced at the C-terminus into KRAS4A and KRAS4B. The RAS proteins are all nearly identical at their N-termini and core effector binding domains, but have divergent C-terminal membrane-binding regions that impart different subcellular localization and subtle differences in signaling. Although the role of constitutively activated oncogenic RAS has been well established to play a role in cancer, recent work has suggested that wild-type RAS signaling may also be important in tumorigenesis. Wild-type RAS proteins have been shown to be activated in the presence of oncogenic KRAS. However, the consequences of this activation are context-dependent, as signaling through the wild-type RAS proteins has been shown to both suppress neoplastic growth and promote tumorigenesis under different circumstances.

I sought to investigate the role of the wild-type RAS proteins in two clinically –relevant models of cancer: pancreatic, the type of cancer most frequently associated with KRAS mutations, and lung cancer, the cancer in which KRAS mutations affect the highest number of patients. First, I tested whether a loss of wild type Hras altered tumorigenesis in a mouse model of pancreatic cancer driven by oncogenic Kras. Hras homozygous null mice (Hras-/- ) exhibited more precancerous lesions of the pancreas as well as more off-target skin papillomas compared to their wild type counterparts, indicating that Hras suppresses early Kras-driven pancreatic tumorigenesis. Loss of Hras also reduced the survival of mice engineered to develop aggressive pancreatic cancer by the additional disruption of one allele of the tumor suppressor p53 (Trp53R172H/+). However, this survival advantage was lost when both alleles of Trp53 were mutated, suggesting that wild-type HRas inhibits tumorigenesis in a p53-dependant manner.

Next, I investigated the role that wild-type Hras and Nras play in a chemical carcinogen-induced model of lung cancer. In mice treated with urethane, a carcinogen that induces Kras-mutation positive lung lesions, Hras-/ mice once again developed more tumors than wild-type mice. Interestingly, however, this effect was not observed in mice lacking wild-type Nras. Mice lacking both Hras and Nras alleles developed approximately the same number of tumors as Hras-/- mice, thus the additional loss of Nras does not appear to enhance the tumor-promoting effects of loss of Hras. In summary, signaling through wild-type Hras, but not Nras, suppresses tumorigenesis in a carcinogen-induced model of lung cancer.