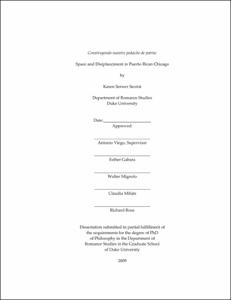 This dissertation explores the relationship between identity and place in the imagination, performance and production of post-World War II Puerto Rican urban space in Chicago. Specifically, I contend that the articulation of Puerto Rican spatiality in the city has emerged primarily as a response to the threat of local displacement as a byproduct of urban renewal and gentrification. I further argue the experience of displacement, manifested through territorial attachment, works to deepen the desire for community and belonging. Through a performance and cultural studies approach, this project works to track this recent history of Puerto Rican geographic and psychic displacement within Chicago as it is evidenced by various performative spatial interventions and manifested within the community's expressive culture.

My topics of study include the 1966 Division Street Riots, the Young Lords Organization (YLO), Humboldt Park's Paseo Boricua and spoken-word poet David Hernández. Through these interventions and forms of expression, I argue that physical, political, discursive, and affective claims are made to local territory, articulating a Puerto Rican cultural identity inextricably connected to urban space. In so doing, I aim to endorse the theoretical utility of concepts of "space" by highlighting the enduring material and metaphoric significance of place for Puerto Ricans, arguing against a tendency in contemporary Puerto Rican studies to equate circular migratory movement with transnationalism by virtue of its opposition to territorially grounded definitions of identity.