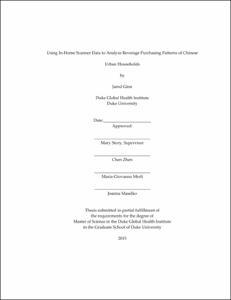 Background: Due to recent rapid economic development, China has seen changes in what foods households are purchasing as well as the general health of the population.

In the United States and other high-income countries, in-home scanner programs allow consumer packaged goods companies to measure household level grocery store food purchases and analyze trends of certain food categories while also linking to demographic information of the purchaser. Since few similar research has been conducted in China, especially with beverages, this study aims to examine beverage purchasing patterns among urban households in China across different demographics. Using the results, the study hopes to initiate conversations about what, if any, opportunities exist for health policy to intervene for a healthier Chinese population.

Methods: Secondary data analysis was conducted using scanner data to quantitatively analyze the beverage purchasing patterns among urban households in China from 2011-2013. Scanner data were acquired by Research Triangle Institute (RTI) from Kantar Worldpanel (Kantar Group) and provided for this study. Data were collected from four income levels in 24 provinces/municipalities from a panel of 40,000 Chinese households.

Conclusions: Because of the majority of beverage volume purchased being SSB, the significance of higher income households purchasing certain SSB more, the volume of certain SSB increasing every year, and the patterns of purchasing volume based on geography and certain periods of the year, creative health policies and campaigns should be addressed now in China to address the growing trends that other countries have seen linking SSB consumption to obesity, diabetes, and cardiovascular disease. Future research should examine whether front-of-package labeling, SSB taxes, advertisement restrictions, regulations around schools, and nutrition education campaigns could reduce SSB purchases in China.