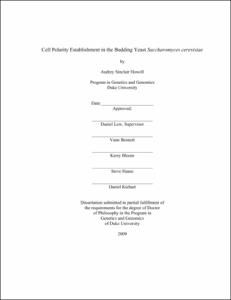 Establishing an axis of cell polarity is central to cell motility, tissue morphogenesis, and cell proliferation. A highly conserved group of polarity regulators is responsible for organizing a wide variety of polarized morphologies. One of the most widely expressed polarity regulators is the Rho-type GTPase Cdc42. In response to cell cycle cues the budding yeast <italic>Saccharomyces cerevisiae</italic> polarizes Cdc42p to a discrete site on the cell periphery. GTP-Cdc42p recruits a number of effectors that aid in the organization of a polarized actin cytoskeleton. The polarized actin cytoskeleton acts as tracks to facilitate the delivery of the secretory vesicles that will grow the bud, an essential process for an organism that proliferates by budding. We have employed treatment with the actin depolymerizing drugs Latrunculin A and B as well as high-speed timelapse microscopy of fluorescently labeled polarity proteins to characterize the assembly of the incipient bud site.

Often, ensuring that only a single axis of polarity is established is as important as generating asymmetry in the cell. Even in the absence of positional cues dictating the direction of polarization, many cells are still able to self-organize and establish one, and only one, polarity axis through a process termed symmetry breaking. Symmetry breaking is thought to employ positive feedback to amplify stochastic fluctuations in protein concentration into a larger asymmetry. To test whether singularity could be guaranteed by the amplification mechanism we re-wired yeast to employ a synthetic positive feedback mechanism. The re-wired cells could establish polarity, however they occasionally made two buds simultaneously, suggesting that singularity is guaranteed by the amplification mechanism.