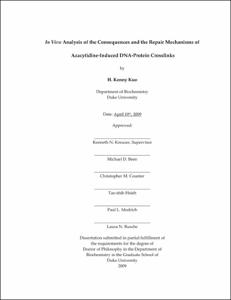 5-azacytidine and its derivatives are cytidine analogs used for leukemia chemotherapy. The primary effect of 5-azacytidine is the prohibition of cytosine methylation, which results in covalent DNA-methyltransferase crosslinks at cytosine methylation sites. These DNA-protein crosslinks have been suggested to cause chromosomal rearrangements and contribute to cytotoxicity, but the detailed mechanisms of DNA damage and the repair pathways of DNA-protein crosslinks have not been elucidated.

We used 2-dimensional agarose gel electrophoresis and electron microscopy to analyze plasmid pBR322 replication dynamics in Escherichia coli cells grown in the presence of 5-azacytidine. 2-dimensional gel analysis revealed the accumulation of specific bubble- and Y-molecules, dependent on overproduction of the cytosine methyltransferase EcoRII and treatment with 5-azacytidine. Furthermore, a point mutation that eliminates a particular EcoRII methylation site resulted in disappearance of the corresponding bubble- and Y-molecules. These results imply that 5-azacytidine-induced DNA-protein crosslinks block DNA replication in vivo. RecA-dependent X-structures were also observed after 5-azacytidine treatment. These molecules may be generated from blocked forks by recombinational repair and/or replication fork regression. In addition, electron microscopy analysis revealed both bubbles and rolling circles after 5-azacytidine treatment. These results suggest that replication can switch from theta to rolling circle mode after a replication fork is stalled by a DNA-methyltransferase crosslink. The simplest model for the conversion of theta to rolling-circle mode is that the blocked replication fork is cleaved by a branch-specific endonuclease. Such replication-dependent DNA breaks may represent an important pathway that contributes to genome rearrangement and/or cytotoxicity.

In addition, we performed a transposon mutagenesis screen and found that mutants defective in the tmRNA translational quality control system are hypersensitive to 5-azacytidine. The hypersensitivity of these mutants requires expression of active methyltransferase, indicating that hypersensitivity is dependent on DNA-methyltransferase crosslink formation. Furthermore, the tmRNA pathway is activated upon 5-azacytidine treatment in cells expressing methyltransferase, resulting in increased SsrA tagging of cellular proteins. These results support a "chain-reaction" model, in which transcription complexes blocked by 5-azacytidine-induced DNA-protein crosslinks result in ribosomes stalling on the attached nascent transcripts, and the tmRNA pathway is invoked for cleaning up the resulting pile-ups. In support of this model, an ssrA mutant is also hypersensitive to antibiotic streptolydigin, which blocks RNA polymerase elongation. These results reveal a novel role for the tmRNA system in clearance of coupled transcription/translation complexes in which RNA polymerase has become blocked.