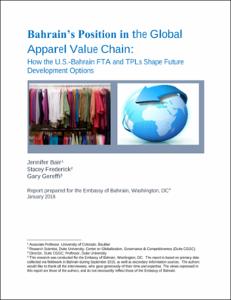 View / Download
941.8 Kb
Date
Authors
Gereffi, G
Frederick, S
Bair, J
Repository Usage Stats
844
views
753
downloads
Abstract
This report analyzes the situation of Bahrain’s industry and its prospects in light of the looming TPL expiration. The Bahraini industry oriented to the U.S. market contains two distinct segments: textile manufacturers, which own spinning, weaving and finishing mills in Bahrain, and rely on TPL for a relatively small portion (just over a third) of the final products they exports to the United States; and apparel companies, which currently rely on TPL for 100% of their garment exports to the United States, since these contain fabrics and yarn from third party countries, such as China. The apparel companies currently exporting to the U.S. from Bahrain are owned by foreign firms, they employ predominantly migrant workers from South Asia, and they have other production locations in the Gulf region, including Jordan and Egypt. Consequently, if garment manufacturers are unable to receive duty-free access to the U.S. market once TPLs expire in 2016, they are unlikely to stay in the country, in contrast to the textile companies, whose investments in Bahrain are far more significant. The report contains a series of recommendations regarding different ways in which Bahrain might continue to receive limited exemptions from the yarn-forward rules of origin after 2016. These proposals include, but are not limited to, an extension of the current benefit.
Type
Report
Permalink
https://hdl.handle.net/10161/11512
Published Version (Please cite this version)
10.13140/RG.2.1.3097.0963
Collections
More Info
Show full item record Professor Emeritus of Sociology
Gary Gereffi is Emeritus Professor of Sociology and Director of the Global Value Chains Center at Duke University (https://gvcc.duke.edu/).  He has published over a dozen books and numerous articles on globalization, industrial upgrading, and social and economic development, and he is one of the originators of the global value chains framework.  His most recent books are:  <a href="https://www.elgaronline.com/view/edcoll/