Development and Application of Aptamer-Based Therapeutics 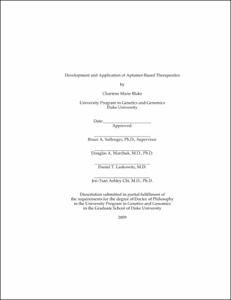 Stroke is the leading cause of morbidity and the third leading cause of death in the United States. Over 80% of strokes are ischemic in nature, produced by a thrombus occluding the cerebral circulation. Currently, there is only one pharmacologic treatment FDA approved for ischemic stroke; recombinant tissue-type plasminogen activator (rtPA). Unfortunately, thrombolysis with rtPA is underutilized, as it must be administered within three hours of symptom onset and it is not uncommon for treatment to result in intracranial hemorrhage. For these reasons, safe and effective treatments of stroke are a medical necessity.

Aptamers are an attractive emerging class of therapeutic agents that offer additional safety because their activity can be reversed with administration of a complimentary oligonucleotide. Accordingly, I hypothesized that aptamers could be used to treat acute ischemic stroke. First, an antithrombotic aptamer previously generated against coagulation factor IXa was used in a murine model of middle cerebral artery occlusion. Upon factor IXa aptamer administration following stroke, neurological function and inflammatory profiles were improved. Moreover, mice previously treated with the aptamer, followed by induction of subarachnoid hemorrhage, had severe mortality levels and hemorrhage grades that were mitigated by administration of the aptamer's matched antidote.

Second, I generated aptamers against the antifibrinolytic protein plasminogen activator inhibitor-1 (PAI-1), under the hypothesis that aptamer inhibition of PAI-1 would result in a reversible thrombolytic agent. However, after further testing, the aptamers were not found to disrupt the interaction between PAI-1 and its target proteases. Instead, the aptamers were shown to prevent PAI-1 binding to vitronectin, which translated to restoration of breast cancer cell adhesion in an environment of PAI-1 mediated detachment.

Therefore, aptamer inhibition of factor IXa has demonstrated efficacy in improving outcome following stroke, and should life-threatening hemorrhage arise, an antidote specific to the interventional agent is able to decrease not only hemorrhage grade, but also mortality. This may result in a safer stroke therapy, while a novel aptamer generated against PAI-1 may have application as an antimetastatic agent, which could be used as adjuvant therapy to traditional breast cancer treatment.