What Have We GAINed? An Analysis of Federal Incentive Policies in the Orphan and Anti-Infective Drug Markets 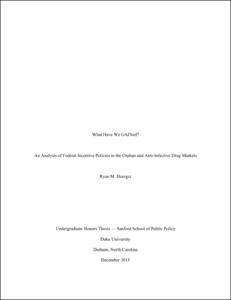 View / Download
769.8 Kb
Date
Author
Hoerger, Ryan
Advisor
Angrist, Misha
Repository Usage Stats
496
views
513
downloads
Abstract
The world faces a growing danger in the form of antibiotic resistance and a dwindling anti-infective pipeline. To help combat the threat, Congress passed legislation (the “GAIN Act”) in 2012 that grants five years of additional exclusivity—or protection from competition from generic products—to drug applications that are designated as qualified infectious disease products (QIDPs). The exclusivity incentive is nearly a carbon copy of the hallmark design of the 1983 Orphan Drug Act, which was passed to spur development of treatments for rare diseases. This thesis addresses the effectiveness of incentive policies in facilitating drug development in the orphan drug market for rare diseases and the anti-infective drug market. Using pricing data from Medicare Part D program and drug databases, the research develops frameworks for both the orphan and anti-infective markets and finds that the two markets vary widely across all measured categories. During the course of the past decade, anti-infectives became less of a priority in the development pipelines of the world’s top pharmaceutical companies, and content analysis of earnings call transcripts reveals that industry executives do not seem to be discussing the new incentive. The results indicate that a new or augmented approach to anti-infectives may be needed. Instead of using exclusivity, the government should consider offering benefits that companies realize at the front end of the research and development pipeline as a means to increase drug development in the anti-infective drug market.
Type
Honors thesis
Department
Public Policy Studies
Subject
anti-infective
GAIN
Congress
Orphan Drug Act
antibiotics
Permalink
https://hdl.handle.net/10161/11543
Citation
Hoerger, Ryan (2016). What Have We GAINed? An Analysis of Federal Incentive Policies in the Orphan and Anti-Infective Drug Markets. Honors thesis, Duke University. Retrieved from https://hdl.handle.net/10161/11543.
Collections
More Info
Show full item record