A Study of Extracting Information from Neuronal Ensemble Activity and Sending Information to the Brain Using Microstimulation in Two Experimental Models: Bipedal Locomotion in Rhesus Macaques and Instructed Reaching Movements in Owl Monkeys 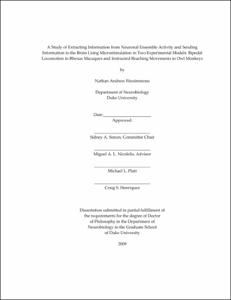 The loss of the ability to walk as the result of neurological injury or disease critically impacts the mobility and everyday lifestyle of millions. The World Heath Organization (WHO) estimates that approximately 1% of the world's population needs the use of a wheelchair to assist their personal mobility. Advances in the field of brain-machine interfaces (BMIs) have recently demonstrated the feasibility of using neuroprosthetics to extract motor information from cortical ensembles for more effective control of upper-limb replacements. However, the promise of BMIs has not yet been brought to bear on the challenge of restoring the ability to walk. A future neuroprosthesis designed to restore walking would need two streams of information flowing between the user's brain and the device. First, the motor control signals would have to be extracted from the brain, allowing the robotic prosthesis to behave in the manner intended by the user. Second, and equally important would be the flow of sensory and proprioceptive information back to the user from the neuroprosthesis. Here, I contribute to the foundation of such a bi-directional brain machine interface for the restoration of walking in a series of experiments in two animal models, designed to show the feasibility of (1) extracting locomotor information from neuronal ensemble activity and (2) sending information back into the brain via cortical microstimulation.

In a set of experiments designed to investigate the extraction of locomotor parameters, I chronically recorded from ensembles of neurons in primary motor (M1) and primary somatosensory (S1) cortices in two adult female rhesus macaques as they walked bipedally, at various speeds, both forward and backward on a custom treadmill. For these experiments, rhesus monkeys were suitable because of their ability to walk bipedally in a naturalistic manner with training. I demonstrate that the kinematics of bipedal walking in rhesus macaques can be extracted from neuronal ensemble recordings, both offline and in real-time. The activity of hundreds of neurons was processed by a series of linear decoders to extract accurate predictions of leg joints in three dimensional space, as well as leg muscle electromyograms (EMGs). Using a multi-layered switching model allowed us to achieve increased extraction accuracy by segregating different behavioral modes of walking.

In a second set of experiments designed to investigate the usage of microstimulation as a potential artificial sensory channel, I instructed two adult female Aotus trivirgatus (owl monkeys) about the location of a hidden food reward using a series of cortical microstimulation patterns delivered to primary somatosensory (S1) cortex. The owl monkeys discriminated these microstimulation patterns and used them to guide reaching movements to one of two targets. Here, owl monkeys were used which were previously implanted with electrode arrays of high longevity and stability. These monkeys were previously trained on a somatosensory cued task, which allowed a quick transition to microstimulation cueing. The owl monkeys learned to interpret microstimulation patterns, and their skill and speed of learning new patterns improved over several months. Additionally, neuronal activity recorded on non-stimulated electrodes in motor (M1), premotor (PMD) and posterior parietal (PP) cortices allowed us to examine the immediate neural responses to single biphasic stimulation pulses as well as overall responses to the spatiotemporal pattern. Using this recorded neuronal activity, I showed the efficacy of several linear classification algorithms during microstimulation.

These results demonstrate that locomotor kinematic parameters can be accurately decoded from the activity of neuronal ensembles, that multichannel microstimulation is a viable information channel for sensorized prosthetics, and that the technical limitations of combining these techniques can be overcome. I propose that bi-directional BMIs integrating these techniques will one day restore the ability to walk to severely paralyzed patients.