Investigation of the Molecular Mechanism for Cerebral Cavernous Malformations 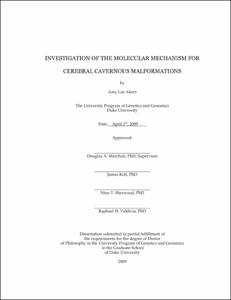 Cerebral cavernous malformations (CCM) are vascular anomalies of the central nervous system comprised of grossly-dilated blood-filled capillaries. CCM leisons may occur sporadically or by inheritance of a mutation in one of three genes, <italic>CCM1</italic>, <italic>CCM2</italic>, or <italic>CCM3</italic>. Prior to the identification of the genes involved in pathogenesis, sporadic and inherited cases could be distinguished by lesion burden where sporadic cases exclusively showed single lesions, and patients with inherited disease developed multiple lesions. This observation lead us to hypothesize that CCM lesion genesis may follow a two-hit genetic mechanism. To investigate this hypothesis and determine the molecular mechanism underlying CCM pathogeneis, we used resected human lesion samples to identify biallelic somatic and germline mutations that are specific to the lesion endothelium. Additionaly, we created mouse models in which heterozygosity of <italic>Ccm1</italic> or <italic>Ccm2</italic> in conjunction with deficiency for either the p53 or Msh2 genes, recapitulates the genetic and phenotypic properties of the human condition. In conclusion, we have provided evidence that CCM lesion genesis requires inactivation of both allelic copies for <italic>CCM1</italic>, <italic>CCM2</italic>, or <italic>CCM3</italic>within a subset of vascular endothelium.