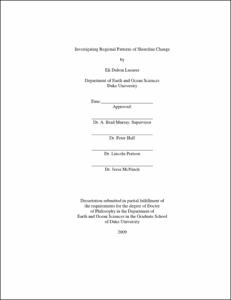 My doctoral work stems from an original motivation to understand more closely why some areas of sandy coastlines erode and others accrete<—>an intriguing fundamental question and one of societal relevance wherever human coastal infrastructure exists. What are the physical processes driving shoreline change, and over what spatial and temporal scales are they manifest? If forces driving the littoral system change, how does the shoreline respond? Can we attribute observed patterns of shoreline change to a particular process?

One overarching hypothesis was that under regimes of high- and low-angle deep-water incident waves, alongshore shoreline perturbations grow or diffuse away, respectively. To test the hypothesis we looked for a correlation between shoreline curvature (showing perturbations to a nearly straight coastline) and shoreline change in observed measurements. High-resolution topographic lidar surveys of the North Carolina Outer Banks from 1996<–>2006 allowed robust, quantitative comparisons between shoreline surveys spanning tens of kms. In Chapter 1 [<italic>Lazarus and Murray</italic>, 2007] we report that over the last decade, at multi-km scales along the barrier islands, convex-seaward promontories tended to erode and concave-seaward embayments accrete<—>a pattern of diffusion consistent with the smoothing effects of alongshore-transport gradients driven by a low-angle wave climate. Why then, after a decade or more of smoothing, do plan-view bumps in the shoreline still persist? In Chapter 2 [<italic>Lazarus et al.</italic>, in review] we compile evidence suggesting that (a) a framework of paleochannels may control the areas of persistent multi-km-scale shoreline convexity that (b) in turn drive decadal-term transient changes in shoreline morphology by (c) affecting gradients in wave-driven alongshore sediment transport.

In Chapter 3, a third investigation of large-scale coastal behavior, we explore an existing premise that shoreline change on a sandy coast is a self-affine signal wherein patterns of changes are scale-invariant, perhaps suggesting that a single process operates across the scales. Applying wavelet analysis<—>a mathematical technique involving scaled filter transforms<—>we confirm that a power law fits the average variance of shoreline change at alongshore scales spanning approximately three orders of magnitude (5<–>5000 m). The power law itself does not necessarily indicate a single dominant driver; beach changes across those scales likely result from a variety of cross-shore and alongshore hydrodynamic processes. A paired modeling experiment supports the conclusion that the power relationship is not an obvious function of wave-driven alongshore sediment transport alone.

Our tests of theory against field observations are middle steps in pattern-to-process attribution; they fit into a larger body of coastal morphodynamic research that in time may enable shoreline-change prediction. Present hydrodynamic models are still too limited in spatial and temporal scope to accommodate the extended scales at which large morphological changes occur, but more integrated quantitative models linking bathymetry, wave fields, and geologic substrate are underway and will set the next course of questions for the discipline.