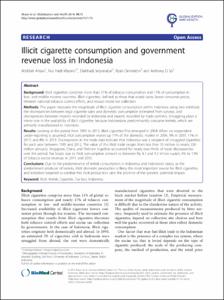 View / Download
202.2 Kb
Date
Authors
Ahsan, Abdillah
Wiyono, Nur Hadi
Setyonaluri, Diahhadi
Denniston, Ryan
So, Anthony D
Repository Usage Stats
120
views
125
downloads
Abstract
BACKGROUND: Illicit cigarettes comprise more than 11% of tobacco consumption and 17% of consumption in low- and middle-income countries. Illicit cigarettes, defined as those that evade taxes, lower consumer prices, threaten national tobacco control efforts, and reduce excise tax collection. METHODS: This paper measures the magnitude of illicit cigarette consumption within Indonesia using two methods: the discrepancies between legal cigarette sales and domestic consumption estimated from surveys, and discrepancies between imports recorded by Indonesia and exports recorded by trade partners. Smuggling plays a minor role in the availability of illicit cigarettes because Indonesians predominantly consume kreteks, which are primarily manufactured in Indonesia. RESULTS: Looking at the period from 1995 to 2013, illicit cigarettes first emerged in 2004. When no respondent under-reporting is assumed, illicit consumption makes up 17% of the domestic market in 2004, 9% in 2007, 11% in 2011, and 8% in 2013. Discrepancies in the trade data indicate that Indonesia was a recipient of smuggled cigarettes for each year between 1995 and 2012. The value of this illicit trade ranges from less than $1 million to nearly $50 million annually. Singapore, China, and Vietnam together accounted for nearly two-thirds of trade discrepancies over the period. Tax losses due to illicit consumption amount to between Rp 4.1 and 9.3 trillion rupiah, 4% to 13% of tobacco excise revenue, in 2011 and 2013. CONCLUSIONS: Due to the predominance of kretek consumption in Indonesia and Indonesia's status as the predominant producer of kreteks, illicit domestic production is likely the most important source for illicit cigarettes, and initiatives targeted to combat this illicit production carry the promise of the greatest potential impact.
Type
Journal article
Subject
Commerce
Data Collection
Humans
Indonesia
Prevalence
Smoking
Taxes
Tobacco Products
Permalink
https://hdl.handle.net/10161/11600
Published Version (Please cite this version)
10.1186/s12992-014-0075-7
Publication Info
Ahsan, Abdillah; Wiyono, Nur Hadi; Setyonaluri, Diahhadi; Denniston, Ryan; & So, Anthony D (2014). Illicit cigarette consumption and government revenue loss in Indonesia. Global Health, 10. pp. 75. 10.1186/s12992-014-0075-7. Retrieved from https://hdl.handle.net/10161/11600.
This is constructed from limited available data and may be imprecise. To cite this article, please review & use the official citation provided by the journal.
Collections
More Info
Show full item record

Visiting Professor of the Practice in the Sanford School of Public Policy
Dr. Anthony So joined Duke University’s Sanford School of Public Policy in 2004 as director of a new Program on Global Health and Technology Access. The program focuses on issues of globalization and health, particularly innovation and access to essential medicines for those in developing countries. The program works as the Strategic Policy Unit for ReAct, a global coalition dedicated to combating antibiotic resistance. Dr. So's research on the ownership of knowledge and how it is best h