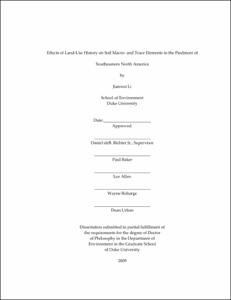 Land use histories affect the rate and pattern of soil nutrients at regional and global scale. However, former studies have rarely focused on soil trace elements (B, Mn, Zn, Cu and Fe). In this study, we aimed at the long-term biogeochemical cycling pattern and spatial heterogeneity of soil trace elements in response to land use changes. We conducted experiment at Calhoun experiment forest in SC and surrounded relic hardwood forest, cultivated land and secondary pine forests with contrasting land use histories in a statistically rigorous and spatially explicit design. Our first study indicated that spatial heterogeneity is greatly reduced in many soil properties by agricultural practices, but that successional forest growth on previously cultivated soils re-structures heterogeneity of soil properties within a few decades. We document cases in which land use alters both the soil property's central tendencies and their heterogeneity (C, N, CN, Ca, K), and cases in which changes are apparent in central tendency but much less so in their heterogeneity (Db). In our second study, samples of the upper 0.6-m mineral soil archived in 1962 and 1997 revealed three cycling patterns: 1) Extractable B and Mn were significantly depleted because tree uptake of B and Mn from mineral-soil greatly outpaced resupplies from atmospheric deposition, mineral weathering, and deep-root uptake. 2) Extractable Zn and Cu changed little during forest growth, indicating that nutrient resupplies kept pace with accumulations by the aggrading forest. 3) Oxalate-extractable Fe increased substantially during forest growth, by about 10-fold more than accumulations in tree biomass. This study indicated that forest Fe cycling is qualitatively different from that of other macro- and micro-nutrients. Thirdly, our results revealed that long-term cultivation substantially diminished the activity of soil iron oxides relative to forest growth. Forest Fe cycling is derived from mineral soil weathering, which suggests a need to explore the underlying mechanisms by which bioturbation (e.g.earthworms) mediates transformations of iron bioavailability and oxidation of organic matter in soils. Overall, the wide range of responses to land use changes among the ecosystem's trace elements and other biogeochemical features illustrates the great dynamics of the soil system over time scales of decades to centuries.