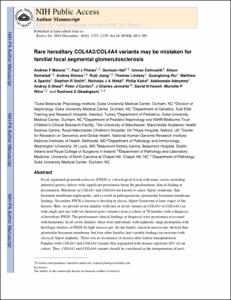 Professor of Pathology
A major focus of both my clinical practice and investigative work is the diagnosis and treatment of disorders affecting solid-organ transplant recipients, particularly infectious complications. For the past 15 years, I have served as the primary pathologist for one of the largest lung transplant programs in the world; in the process contributing to over 20 peer-reviewed publications on complications of lung transplantation, including infections, gastroesophageal reflux, tumors, and antibod Professor of Medicine
Ongoing work focuses on problems of immediate clinical relevance in renal and pancreas transplantation, including issues related to immunosuppression, infection, and cardiovascular events as well as hypertension. Research methodologies employed include randomized clinical trials, cohort studies, and retrospective multivariable analyses based on the transplant database. Assistant Professor of Medicine
I serve as the Associate Program Director for the Nephrology Fellowship Program. My goal is to work with each fellow to ensure they develop a successful career in whatever direction they choose. In my role as Director of Medical Student Research in the Department of Medicine I help promote research in the Department of Medicine during the 3rd year of medical school at Duke University.Nephrology Fellowship Progra
Alphabetical list of authors with Scholars@Duke profiles.