Diesel exhaust particles activate the matrix-metalloproteinase-1 gene in human bronchial epithelia in a beta-arrestin-dependent manner via activation of RAS. 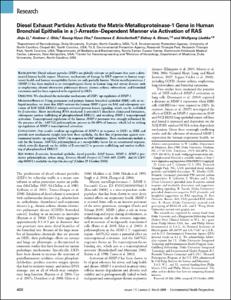 Professor Emeritus of Neurobiology
Dr. Simon's laboratory studies the interaction of chemical stimuli with cultured and intact trigeminal ganglion neurons and taste receptor cells both in culture, in anesthetized and in awake behaving animals. We investigate how chemicals that are either bitter and/or irritating ( e.g., nicotine, capsaicin, colloidal particles) interact with particular types of receptors (e.g. nicotinic acetylcholine receptors or vanilloid receptors) to produce a bitter, irritating or painful sensation. We a
Alphabetical list of authors with Scholars@Duke profiles.