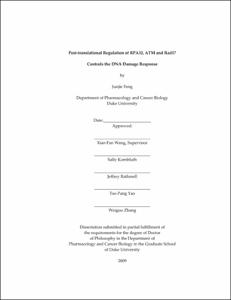 The eukaryotic genome integrity is safeguarded by the DNA damage response, which is composed of a network of signal transduction pathways that upon genotoxic stresses, arrest cell cycle progression, motivate repair processes, or induce apoptosis or senescence when cells incur irreparable DNA damage. During this process, DNA damage-induced post-translational modifications, most notably protein phosphorylation, of a variety of DNA damage-responsive proteins has been shown to mediate the initiation, transduction and reception of the DNA damage signals, resulting in alterations of their stability, activities or subcellular localizations, ultimately leading to activation of various downstream effector pathways.

While a lot has been elucidated on the downstream events of the DNA damage response, little is known about how DNA damage is detected. Two still ongoing studies of this dissertation attempt to address this question. Our preliminary work on ATM indicates that serine 2546 is critical for its kinase activity. Substitution of this residue with phosphomimetic aspartate, but not nonphosphorylable alanine, abrogates the kinase activity of ATM and fails to rescue the checkpoint-deficient phenotype exhibited by the ATM-deficient cells, suggesting that removal of an inhibitory phospho group at S2546 might be required for the activation of ATM. In another study, we identified a novel DNA-damage responsive threonine residue (T622) in Rad17, which undergoes ATM/ATR-dependent phosphorylation in vitro and in vivo. Ectopic expression of a phosphodeficient mutant (T622A) of Rad17, but not its wild-type control, shows a pronounced defect in sustaining Chk1 phosphorylation and the corresponding G2/M checkpoint upon DNA damage, suggesting that phosphorylation at T622 might complement that on the two previously reported phosphorylation sites, S635 and S645, to mediate G2/M checkpoint activation while the latter is primarily responsible for intra-S phase checkpoint.

Although a large amount of knowledge has been accumulated about the initiation and activation process of the DNA damage response, how cells recover, the equally important flip side of the response, has remained poorly understood. We have found that in cells recovering from replication stress, RPA32 phosphorylation at ATM/ATR-responsive sites T21 and S33, which reportedly suppresses DNA replication and recruiting other checkpoint and repair proteins to the DNA lesions, is reversed by the serine/threonine protein phosphatase 2A (PP2A). Cells with a RPA32 persistent-phosphorylation mimic (T21D/S33D) exhibit normal checkpoint activation and re-enter the cell cycle normally after recovery, but display a pronounced defect in the repair of DNA breaks. These data indicate that PP2A-mediated RPA32 dephosphorylation may be a required event during the repair process in the DNA damage response.