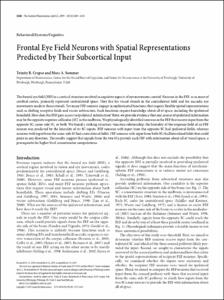 View / Download
575.5 Kb
Date
Authors
Crapse, Trinity B
Sommer, Marc A
Repository Usage Stats
145
views
115
downloads
Abstract
The frontal eye field (FEF) is a cortical structure involved in cognitive aspects of eye movement control. Neurons in the FEF, as in most of cerebral cortex, primarily represent contralateral space. They fire for visual stimuli in the contralateral field and for saccadic eye movements made to those stimuli. Yet many FEF neurons engage in sophisticated functions that require flexible spatial representations such as shifting receptive fields and vector subtraction. Such functions require knowledge about all of space, including the ipsilateral hemifield. How does the FEF gain access to ipsilateral information? Here, we provide evidence that one source of ipsilateral information may be the opposite superior colliculus (SC) in the midbrain. We physiologically identified neurons in the FEF that receive input from the opposite SC, same-side SC, or both. We found a striking structure-function relationship: the laterality of the response field of an FEF neuron was predicted by the laterality of its SC inputs. FEF neurons with input from the opposite SC had ipsilateral fields, whereas neurons with input from the same-side SC had contralateral fields. FEF neurons with input from both SCs had lateralized fields that could point in any direction. The results suggest that signals from the two SCs provide each FEF with information about all of visual space, a prerequisite for higher level sensorimotor computations.
Type
Journal article
Subject
Animals
Cerebral Cortex
Macaca mulatta
Neurons
Photic Stimulation
Predictive Value of Tests
Psychomotor Performance
Superior Colliculi
Visual Fields
Visual Pathways
Permalink
https://hdl.handle.net/10161/11730
Published Version (Please cite this version)
10.1523/JNEUROSCI.4906-08.2009
Publication Info
Crapse, Trinity B; & Sommer, Marc A (2009). Frontal eye field neurons with spatial representations predicted by their subcortical input. J Neurosci, 29(16). pp. 5308-5318. 10.1523/JNEUROSCI.4906-08.2009. Retrieved from https://hdl.handle.net/10161/11730.
This is constructed from limited available data and may be imprecise. To cite this article, please review & use the official citation provided by the journal.
Collections
More Info
Show full item record