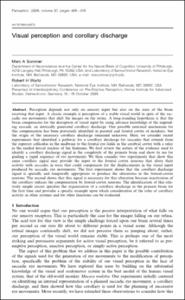 View / Download
295.9 Kb
Date
Authors
Sommer, Marc A
Wurtz, Robert H
Repository Usage Stats
138
views
128
downloads
Abstract
Perception depends not only on sensory input but also on the state of the brain receiving that input. A classic example is perception of a stable visual world in spite of the saccadic eye movements that shift the images on the retina. A long-standing hypothesis is that the brain compensates for the disruption of visual input by using advance knowledge of the impending saccade, an internally generated corollary discharge. One possible neuronal mechanism for this compensation has been previously identified in parietal and frontal cortex of monkeys, but the origin of the necessary corollary discharge remained unknown. Here, we consider recent experiments that identified a pathway for a corollary discharge for saccades that extends from the superior colliculus in the midbrain to the frontal eye fields in the cerebral cortex with a relay in the medial dorsal nucleus of the thalamus. We first review the nature of the evidence used to identify a corollary discharge signal in the complexity of the primate brain and show its use for guiding a rapid sequence of eye movements. We then consider two experiments that show this same corollary signal may provide the input to the frontal cortex neurons that alters their activity with saccades in ways that could compensate for the displacements in the visual input produced by saccadic eye movements. The first experiment shows that the corollary discharge signal is spatially and temporally appropriate to produce the alterations in the frontal-cortex neurons. The second shows that this signal is necessary for this alteration because inactivation of the corollary reduces the compensation by frontal-cortex neurons. The identification of this relatively simple circuit specifies the organization of a corollary discharge in the primate brain for the first time and provides a specific example upon which consideration of the roles of corollary activity in other systems and for other functions can be evaluated.
Type
Journal article
Subject
Animals
Brain Mapping
Frontal Lobe
Macaca mulatta
Mediodorsal Thalamic Nucleus
Neurons
Parietal Lobe
Photic Stimulation
Reaction Time
Saccades
Thalamus
Visual Pathways
Visual Perception
Permalink
https://hdl.handle.net/10161/11731
Published Version (Please cite this version)
10.1068/p5873
Publication Info
Sommer, Marc A; & Wurtz, Robert H (2008). Visual perception and corollary discharge. Perception, 37(3). pp. 408-418. 10.1068/p5873. Retrieved from https://hdl.handle.net/10161/11731.
This is constructed from limited available data and may be imprecise. To cite this article, please review & use the official citation provided by the journal.
Collections
More Info
Show full item record