Role of E-proteins in B Lymphocyte Commitment and Thymocyte Selection 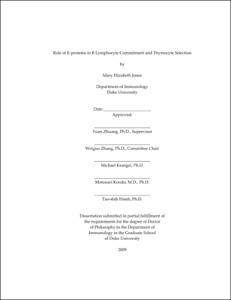 The E-protein transcription factors E2A and HEB regulate various cell processes during the development of B and T lymphocytes, including cell differentiation, lineage commitment, recombination of immune receptor genes, proliferation, and survival. B cell development is dependent on E2A from the earliest stages whereas T cell development relies on the cooperative efforts of both E2A and HEB. Established work demonstrates that the timing and dosage of E-protein expression is critical for mediating these diverse functions. The goal of this dissertation is to develop and utilize new genetic tools to manipulate the timing and dosage of E2A and HEB expression in order to enhance our understanding of E-protein function. Here we develop two new mouse models to identify novel lineage and stage specific roles of E-proteins during B lineage commitment and thymocyte selection.

First, we have generated an E2A inducible mouse model to allow reversible regulation of E2A function and precise timing of induction at the protein level. This system was created by inserting a tamoxifen responsive region of the estrogen receptor ligand binding domain (ER) at the carboxyl end of the <italic>tcfe2a</italic> gene, encoding E2A, to generate E2AER fusion proteins. To our knowledge, the ER fusion system has not yet been tested from an endogenous locus in live animals. Using the E2AER system, we have demonstrated rapidly induced E2AER activity upon tamoxifen treatment that is capable of supporting B cell development in an <italic>ex vivo</italic> culture system. In addition to characterizing the kinetics and reversibility of this inducible system, we have utilized tamoxifen treatment of E2AER B cell progenitors to identify potential novel E2A target genes driving B lineage commitment.

Second, we have analyzed E-protein function during the double positive (DP) stage of alpha beta T cell development by using a Cre-loxp conditional deletion system. Here, E-protein dosage was manipulated by removal of both E2A and HEB, and the timing of deletion was controlled by using a CD4Cre transgene. During development, survival through the DP stage and initiation of differentiation to the subsequent single positive (SP) stage for generation mature alpha beta T cells is dependent on the production of a functional alpha beta T cell receptor (TCR). The mechanism that maintains cells at the DP stage prior to expression of a mature TCR remains unclear. In this study, we have shown that E2A and HEB together are required to maintain DP fate and regulate the transition to the SP stage. Loss of E2A and HEB in DP thymocytes was sufficient to trigger DP to SP differentiation, even in the absence of a TCR. Deletion of E2A and HEB allowed cells to bypass the requirement for a TCR-mediated positive selection signal. These findings identify E2A and HEB as key regulators enforcing thymocyte positive selection to ensure maturing T cells express a functional receptor.