Influence of the thalamus on spatial visual processing in frontal cortex. 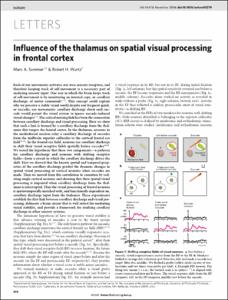