Signal transformations from cerebral cortex to superior colliculus for the generation of saccades. 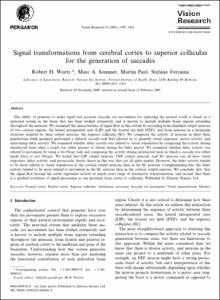 View / Download
1.1 Mb
Date
Authors
Wurtz, RH
Sommer, MA
Paré, M
Ferraina, S
Repository Usage Stats
112
views
121
downloads
Abstract
The ability of primates to make rapid and accurate saccadic eye movements for exploring the natural world is based on a neuronal system in the brain that has been studied extensively and is known to include multiple brain regions extending throughout the neuraxis. We examined the characteristics of signal flow in this system by recording from identified output neurons of two cortical regions, the lateral intraparietal area (LIP) and the frontal eye field (FEF), and from neurons in a brainstem structure targeted by these output neurons, the superior colliculus (SC). We compared the activity of neurons in these three populations while monkeys performed a delayed saccade task that allowed us to quantify visual responses, motor activity, and intervening delay activity. We examined whether delay activity was related to visual stimulation by comparing the activity during interleaved trials when a target was either present or absent during the delay period. We examined whether delay activity was related to movement by using a Go/Nogo task and comparing the activity during interleaved trials in which a saccade was either made (Go) or not (Nogo). We found that LIP output neurons, FEF output neurons, and SC neurons can all have visual responses, delay activity, and presaccadic bursts; hence in this way they are all quite similar. However, the delay activity tended to be more related to visual stimulation in the cortical output neurons than in the SC neurons. Complementing this, the delay activity tended to be more related to movement in the SC neurons than in the cortical output neurons. We conclude, first, that the signal flow leaving the cortex represents activity at nearly every stage of visuomotor transformation, and second, that there is a gradual evolution of signal processing as one proceeds from cortex to colliculus.
Type
Journal article
Subject
Analysis of Variance
Animals
Cerebral Cortex
Macaca mulatta
Memory
Reaction Time
Saccades
Signal Transduction
Statistics, Nonparametric
Superior Colliculi
Permalink
https://hdl.handle.net/10161/11749
Collections
More Info
Show full item record