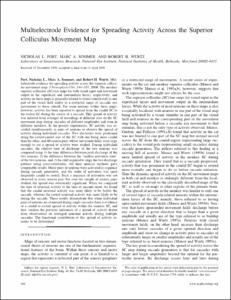 View / Download
291.7 Kb
Date
Authors
Port, NL
Sommer, MA
Wurtz, RH
Repository Usage Stats
132
views
123
downloads
Abstract
The monkey superior colliculus (SC) has maps for both visual input and movement output in the superficial and intermediate layers, respectively, and activity on these maps is generally related to visual stimuli only in one part of the visual field and/or to a restricted range of saccadic eye movements to those stimuli. For some neurons within these maps, however, activity has been reported to spread from the caudal SC to the rostral SC during the course of a saccade. This spread of activity was inferred from averages of recordings at different sites on the SC movement map during saccades of different amplitudes and even in different monkeys. In the present experiments, SC activity was recorded simultaneously in pairs of neurons to observe the spread of activity during individual saccades. Two electrodes were positioned along the rostral-caudal axis of the SC with one being more caudal than the other, and 60 neuron pairs whose movement fields were large enough to see a spread of activity were studied. During individual saccades, the relative time of discharge of the two neurons was compared using 1) the time difference between peak discharge of the two neurons, 2) the difference between the "median activation time" of the two neurons, and 3) the shift required to align the two discharge patterns using cross-correlation. All three analysis methods gave comparable results. Many pairs of neurons were activated in sequence during saccade generation, and the order of activation was most frequently caudal to rostral. Such a sequence of activation was not observed in every neuron pair, but over the sample of neuron pairs studied, the spread was statistically significant. When we compared the time of neuronal activity to the time of saccade onset, we found that the caudal neuronal activity was more likely to be before the saccade, whereas the rostral neuronal activity was more likely to be during the saccade. These results demonstrate that when individual pairs of neurons are examined during single saccades there is evidence of a caudal to rostral spread of activity within the monkey SC, and they confirm the previous inferences of a spread of activity drawn from observations on averaged neuronal activity during multiple saccades. The functional contribution of this spread of activity remains to be determined.
Type
Journal article
Subject
Animals
Brain Mapping
Conditioning (Psychology)
Electrodes, Implanted
Electrophysiology
Macaca mulatta
Neurons
Saccades
Superior Colliculi
Permalink
https://hdl.handle.net/10161/11751
Collections
More Info
Show full item record