Eye fields in the frontal lobes of primates. 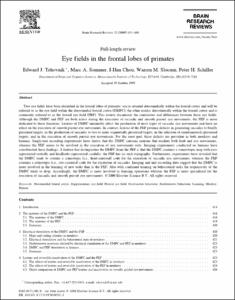 View / Download
2.1 Mb
Date
Authors
Tehovnik, EJ
Sommer, MA
Chou, IH
Slocum, WM
Schiller, PH
Repository Usage Stats
155
views
331
downloads
Abstract
Two eye fields have been identified in the frontal lobes of primates: one is situated dorsomedially within the frontal cortex and will be referred to as the eye field within the dorsomedial frontal cortex (DMFC); the other resides dorsolaterally within the frontal cortex and is commonly referred to as the frontal eye field (FEF). This review documents the similarities and differences between these eye fields. Although the DMFC and FEF are both active during the execution of saccadic and smooth pursuit eye movements, the FEF is more dedicated to these functions. Lesions of DMFC minimally affect the production of most types of saccadic eye movements and have no effect on the execution of smooth pursuit eye movements. In contrast, lesions of the FEF produce deficits in generating saccades to briefly presented targets, in the production of saccades to two or more sequentially presented targets, in the selection of simultaneously presented targets, and in the execution of smooth pursuit eye movements. For the most part, these deficits are prevalent in both monkeys and humans. Single-unit recording experiments have shown that the DMFC contains neurons that mediate both limb and eye movements, whereas the FEF seems to be involved in the execution of eye movements only. Imaging experiments conducted on humans have corroborated these findings. A feature that distinguishes the DMFC from the FEF is that the DMFC contains a somatotopic map with eyes represented rostrally and hindlimbs represented caudally; the FEF has no such topography. Furthermore, experiments have revealed that the DMFC tends to contain a craniotopic (i.e., head-centered) code for the execution of saccadic eye movements, whereas the FEF contains a retinotopic (i.e., eye-centered) code for the elicitation of saccades. Imaging and unit recording data suggest that the DMFC is more involved in the learning of new tasks than is the FEF. Also with continued training on behavioural tasks the responsivity of the DMFC tends to drop. Accordingly, the DMFC is more involved in learning operations whereas the FEF is more specialized for the execution of saccadic and smooth pursuit eye movements.
Type
Journal article
Subject
Animals
Electrophysiology
Frontal Lobe
Humans
Primates
Visual Fields
Permalink
https://hdl.handle.net/10161/11752
Collections
More Info
Show full item record