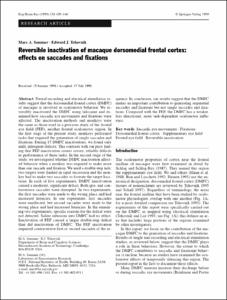 View / Download
419.0 Kb
Date
Authors
Sommer, MA
Tehovnik, EJ
Repository Usage Stats
107
views
122
downloads
Abstract
Neural recording and electrical stimulation results suggest that the dorsomedial frontal cortex (DMFC) of macaque is involved in oculomotor behavior. We reversibly inactivated the DMFC using lidocaine and examined how saccadic eye movements and fixations were affected. The inactivation methods and monkeys were the same as those used in a previous study of the frontal eye field (FEF), another frontal oculomotor region. In the first stage of the present study, monkeys performed tasks that required the generation of single saccades and fixations. During 15 DMFC inactivations, we found only mild, infrequent deficits. This contrasts with our prior finding that FEF inactivation causes severe, reliable deficits in performance of these tasks. In the second stage of the study, we investigated whether DMFC inactivation affected behavior when a monkey was required to make more than one saccade and fixation. We used a double-step task: two targets were flashed in rapid succession and the monkey had to make two saccades to foveate the target locations. In each of five experiments, DMFC inactivation caused a moderate, significant deficit. Both ipsi- and contraversive saccades were disrupted. In two experiments, the first saccades were made to the wrong place and had increased latencies. In one experiment, first saccades were unaffected, but second saccades were made to the wrong place and had increased latencies. In the remaining two experiments, specific reasons for the deficit were not detected. Saline infusions into DMFC had no effect. Inactivation of FEF caused a larger double-step deficit than did inactivation of DMFC. The FEF inactivation impaired contraversive first or second saccades of the sequence. In conclusion, our results suggest that the DMFC makes an important contribution to generating sequential saccades and fixations but not single saccades and fixations. Compared with the FEF, the DMFC has a weaker, less directional, more task-dependent oculomotor influence.
Type
Journal article
Subject
Anesthetics, Local
Animals
Behavior, Animal
Fixation, Ocular
Frontal Lobe
Lidocaine
Macaca mulatta
Photic Stimulation
Psychophysics
Reaction Time
Saccades
Visual Fields
Permalink
https://hdl.handle.net/10161/11754
Collections
More Info
Show full item record