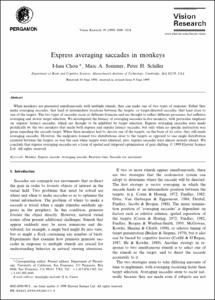 View / Download
645.5 Kb
Date
Authors
Chou, IH
Sommer, MA
Schiller, PH
Repository Usage Stats
139
views
128
downloads
Abstract
When monkeys are presented simultaneously with multiple stimuli, they can make one of two types of response. Either they make averaging saccades, that land at intermediate locations between the targets, or target-directed saccades, that land close to one of the targets. The two types of saccades occur at different latencies and are thought to reflect different processes; fast reflexive averaging and slower target selection. We investigated the latency of averaging saccades in five monkeys, with particular emphasis on 'express' latency saccades, which are thought to be inhibited by target selection. Express averaging saccades were made prolifically by the two monkeys that made both express and regular latency saccades, but only when no specific instruction was given regarding the saccade target. When these monkeys had to choose one of the targets, on the basis of its color, they still made averaging saccades. However, the endpoints formed two distributions close to the targets as opposed to one single distribution centered between the targets, as was the case when targets were identical; also, express saccades were almost entirely absent. We conclude that express averaging saccades are a form of spatial and temporal optimization of gaze shifting.
Type
Journal article
Subject
Animals
Macaca mulatta
Photic Stimulation
Reaction Time
Saccades
Permalink
https://hdl.handle.net/10161/11755
Collections
More Info
Show full item record