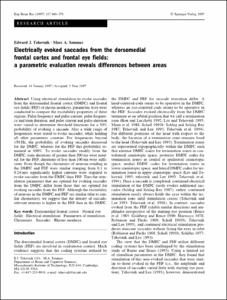 View / Download
450.8 Kb
Date
Authors
Tehovnik, EJ
Sommer, MA
Repository Usage Stats
179
views
144
downloads
Abstract
Using electrical stimulation to evoke saccades from the dorsomedial frontal cortex (DMFC) and frontal eye fields (FEF) of rhesus monkeys, parametric tests were conducted to compare the excitability properties of these regions. Pulse frequency and pulse current, pulse frequency and train duration, and pulse current and pulse duration were varied to determine threshold functions for a 50% probability of evoking a saccade. Also a wide range of frequencies were tested to evoke saccades, while holding all other parameters constant. For frequencies beyond 150 Hz, the probability of evoking saccades decreased for the DMFC, whereas for the FEF this probability remained at 100%. To evoke saccades readily from the DMFC, train durations of greater than 200 ms were needed; for the FEF, durations of less than 100 ms were sufficient. Even though the chronaxies of neurons residing in the DMFC and FEF were similar (ranging from 0.1 to 0.24 ms) significantly higher currents were required to evoke saccades from the DMFC than FEF. Thus the stimulation parameters that are optimal for evoking saccades from the DMFC differ from those that are optimal for evoking saccades from the FEF. Although the excitability of neurons in the DMFC and FEF are similar (due to similar chronaxies), we suggest that the density of saccade-relevant neurons is higher in the FEF than in the DMFC.
Type
Journal article
Subject
Animals
Chronaxy
Electric Stimulation
Fixation, Ocular
Frontal Lobe
Macaca mulatta
Neurons
Saccades
Visual Fields
Permalink
https://hdl.handle.net/10161/11760
Collections
More Info
Show full item record