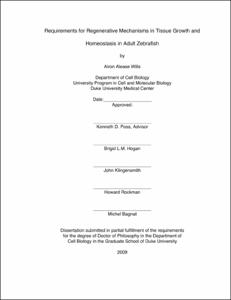 The teleost zebrafish (danio rerio) has a highly elevated regenerative capacity compared to mammals, with the ability to quickly and correctly regenerate complex organs such as the fin and the heart following amputation. Studies in other highly regenerative systems suggest that regenerative capacity is directly related to the homeostatic demands of a given tissue, such as high basal levels of cell turnover or the ability to modify tissue size in response to homeostatic changes. However, it is not known if this relationship is present in vertebrate tissues with blastema-based regeneration. To test this idea, we investigated whether markers associated with regeneration are expressed in uninjured zebrafish tissues, and if treatments that block regeneration also lead to homeostatic defects over long periods.

We found that regenerative capacity is generally required for homeostasis in the fin, as multiple genetic treatments that block regeneration also led to a degenerative loss of distal fin tissue in uninjured animals. In addition, we found that there is extensive cell turnover in the distal fin tissues, accompanied by expression of critical effectors of blastemal regeneration. Both cell proliferation and gene expression were sensitive to changes in Fgf signaling, a factor that is critical for fin regeneration.

In the heart, we found that although there is little cell turnover in uninjured adult animals, the zebrafish heart can undergo rapid, dramatic cardiogenesis in response to animal growth. These growth conditions induce cardiomyocyte hyperplasia similar to regeneration, and induce gene expression changes in the epicardium, a tissue that is critical for cardiac regeneration. We find that the epicardium continually contributes cells to the uninjured heart, even in the absence of cardiac growth. If this contribution is prevented via a long-term block of Fgf signals, scarring can result, indicating that continual activity of epicardium derived cells (EPDCs) is critical for cardiac homeostasis. We have generated reagents that allow us to visualize EPDCs, and find that they contribute cardiac fibroblasts and perivascular cells during rapid cardiac growth. Uncovering the fate of EPDCs during cardiac homeostasis and regeneration will allow us to better understand their function, and may lead to the development of regenerative therapies for human cardiovascular diseases.