Ambiguously Human: Questioning the Dichotomy between Human and Object 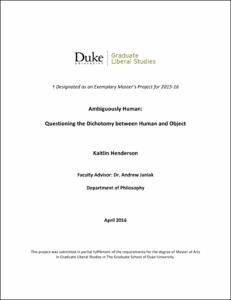 *Designated as an exemplary master's project for 2015-16*

How can bringing together different investigations of defining “human” as opposed to “object” generate new ideas and questions? I looked at a small group of publicly accessible explorations to examine this question from my own perspective and what I could learn of others’. I curated an installation at the Nasher, “Humanized Objects,” looking at objects featuring the human figure and questioning whether they thereby occupy an intermediary position between fully human or object, and gave several gallery talks. I also organized a film series showing “Wall-E,” “Ghost in the Shell,” “The Stepford Wives,” and “Ex Machina,” each of which contributed a unique angle on the question. The website, sites.duke.edu/AmbiguouslyHuman, framed the project and served as a central hub for information. It also hosted the blog where I offered more extended analyses of the components and highlighted other connections to the question. My findings have been informed by readings across several areas, particularly posthumanism and critical disability studies, as well as connections participants brought. The project met my hopes; I saw a reshaping of my understanding and sharpening of my questions. The generic human-object separation across investigations in this project, which I looked at largely through the body, is hierarchical as well as dichotomous, which contributes to the false insistence on a clean conceptual separation between the two categories. I had focused narrowly on the separation of “human” and “object,” but I found that boundary to be more overlapping than independent from other ones I excluded, such as human versus animal or the dehumanization of particular groups within humanity. The human-object boundary is indeed ambiguous, in many ways.
Type
Master's thesis
Department
Graduate Liberal Studies
Subject
museum
human
object
film
interdisciplinary
visual art
Permalink
https://hdl.handle.net/10161/11855
Citation
Henderson, Kaitlin (2016). Ambiguously Human: Questioning the Dichotomy between Human and Object. Master's thesis, Duke University. Retrieved from https://hdl.handle.net/10161/11855.
Collections
More Info
Show full item record