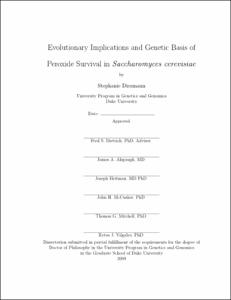 Hydrogen peroxide is used by animals and plants to deter the growth of microbial invaders by inflicting DNA lesions, protein oxidation and lipid membrane modifications. Pathogens protect themselves with enzymes and scavenging proteins. This study investigated population genetic, biochemical and genetic aspects of peroxide survival in Saccharomyces cerevisiae to address its importance for yeast biology and fungal pathogenicity.

Population genetic analyses of DNA sequences from five loci from 103 strains encompassing the known ecological spectrum of S. cerevisiae show that it is a recombining species with three divergent subgroups, which are associated with soil, fruit, and vineyards. Clinical isolates cluster with fruit isolates but are significantly more resistant to peroxide. Clinical isolates are genetically diverse, indicating multiple origins of the pathogenic lifestyle and eliminating the possibility that peroxide resistance is due to shared ancestry rather than it's importance for than its importance in colonizing the host.

Biochemical aspects of peroxide survival were studied in a resistant (high-survival) clinical isolate, a sensitive (low-survival) laboratory strain and their hybrid. Catalase activity and expression levels are indistinguishable among strains. Co-culture assays and growth curve records indicate that a secreted factor improves survival of the laboratory strain and that the phenotypic difference is most pronounced during exponential growth, excluding mechanisms of the General Stress Response effective during stationary phase. Semi-quantitative expression profiles of stress response candidate genes do not differ, suggesting a novel resistance mechanism.

To elucidate the genetic basis of peroxide survival, the hybrid was sporulated and 200 F1 segregants phenotyped and genotyped for oxidative stress candidate genes. Peroxide survival is a dominant quantitative trait and not linked to catalase, peroxidase or superoxide dismutase genes. 1,246 backcross segregants were phenotyped and 93 segregants selectively genotyped using microarrays. A 14-gene locus on chromosome XVI displayed marker-trait association. One gene, RDS2, encodes a zinc cluster protein acting as a regulator of drug sensitivity and contains a non-synonymous polymorphism whose exchange between the parental strains results a 15% decrease in survival in the clinical strain.

This work establishes a novel function for RDS2 in oxidative stress response and demonstrates the effect a quantitative trait nucleotide has on a clinically relevant phenotype.