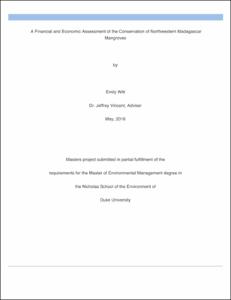 View / Download
1.8 Mb
Date
Author
Witt, Emily
Advisor
Vincent, Jeffrey
Repository Usage Stats
739
views
723
downloads
Abstract
Programs such as REDD (reducing emissions from deforestation and forest degradation) that provide financial incentives to maintain natural carbon stocks are being implemented worldwide to address climate change and the conservation of threatened ecosystems. In developing countries, where the relative cost of conservation is high, these programs are especially attractive to promote sustainable resource use and prevent conversion of valuable ecosystems to other land uses. To incorporate REDD effectively in these areas, the financial costs and benefits resulting from the project implementation needs to be accessed. Quantification of income received from ecosystem services under baseline and project scenarios needs to be estimated, along with other costs of conservation management in order for a comprehensive comparison to be done. Ensuring that the project not only generates additional value, but also promotes the livelihoods of communities that rely on these ecosystems is key to the long-term sustainability of conservation efforts. This report serves as a cost-benefit analysis case study in Ambro-Ambanja Bay, Madagascar. This financial analysis looks at Blue Ventures’ proposed conservation of mangrove forests in Northwestern Madagascar using a REDD project. Project cash flows center around net income derived from certain ecosystem services, carbon income generated from REDD and project implementation and transaction costs. One limitation of this analysis is the exclusion of several partial, indirect and non-use ecosystem services provided by the Ambro-Ambanja Bay mangrove forest. To address this, a total economic valuation framework of all ecosystem services provided by Ambro-Ambanja Bay mangroves was created to provide additional insight into the entire estimated value of healthy mangrove forests. The first chapter of this report provides a background on mangrove ecosystems, the state of Ambaro-Ambanja Bay mangroves, and the general objectives of the proposed project. The second chapter provides an overview of methods used to estimate deforestation, methods used to derive the net income generated from various ecosystem services, and estimates of the costs associated with the project. The chapter details how these costs and benefits were derived under the baseline and project scenarios to provide insight on the impacts the two scenarios have on the estimated financial cash flows. The third chapter consists of a financial analysis of the project from the perspective of each of the major stakeholders. The financial assumptions are stated along with an overview of the government, project developer and community perspectives. Costs and benefits for each perspective were summarized in the form of net present values (NPV), which were calculated under various scenarios. It was found that the project was profitable for the government and community perspectives, and breakeven for the project developer, when carbon income was included. Major differences in NPVs between the assorted scenarios were analyzed and the sensitivities of those NPVs to changes in the stated assumptions were also tested. The fourth chapter details a proposed framework for valuing the additional ecosystem services that were not valued in the initial cost benefit analysis. An overview of those ecosystem services along with the various methods chosen to value each service is discussed. Benefit transfer was the main method employed to value the partial, indirect and non-use services. The section then details what literature estimates, data and calculations were used or are needed to derive the annual per hectare value provided by each service from healthy Ambaro-Ambanja Bay mangroves. The fifth chapter identifies the aspects of the project that might introduce risk to the long-term sustainability of the project. These risks include delayed benefits from the community perspective due to a 14 year project payback period, heavy reliance on carbon credit income for project profitability from the community perspective, and reliance on donor funding to break even from the project developer perspective. Proposed management considerations to mitigate these risks include project refinancing, potential development of an additional project income generating activity, and diversification of donor funding sources. This report makes several key points and recommendations: • Analyzing project profitability from the perspective of all major stakeholders is important in identifying where potential risks lie and who will be bearing those risks. • Although measures of net present value provide a simplified summary of the total discounted value received, it is critical to look deeper into the characteristics of the distribution of costs and benefits over time and the impacts it might have on stakeholders, especially those that are risk-averse. • Assumptions based on extremely volatile and new markets, such as the Voluntary Carbon Market, need to be made with caution and tested for project sensitivity. • Estimation and assessment of the total economic value (TEV) of all of the ecosystem services is needed to determine the true value of healthy mangroves in Ambaro-Ambanja Bay. The indirect value of these services and the impact of deforestation on that value need to be considered by the stakeholders.
Type
Master's project
Department
Nicholas School of the Environment and Earth Sciences
Subject
Mangroves
REDD
Madagascar
Financial Analysis
Ecosystem Services
Valuation
Permalink
https://hdl.handle.net/10161/11911
Citation
Witt, Emily (2016). A Financial and Economic Assessment of the Conservation of Northwestern Madagascar Mangroves. Master's project, Duke University. Retrieved from https://hdl.handle.net/10161/11911.
Collections
More Info
Show full item record